How much water should you be drinking each day?

Getting the right amount is really about just listening to your body. 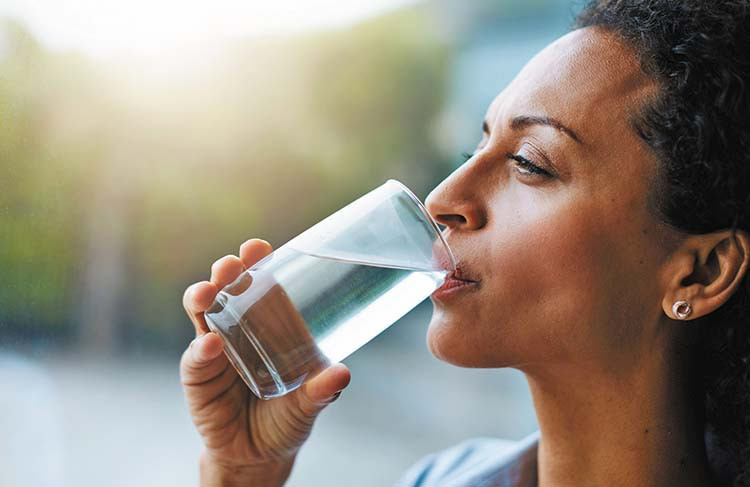 Many experts these days are advising women to drink lots of water to stay in good health, and women seem to be listening. It's common to see people toting around voluminous bottles of water and swigging from them all day long. And there's no question that water is necessary for optimal health: it keeps your urinary tract healthy, keeps food moving along your digestive tract, helps regulate your blood pressure and body temperature, and works to cushion and protect joints, organs, and other tissues.

One recent study suggested that not drinking enough water could also affect women's cognition. The study, published online in November 2019 by the European Journal of Nutrition, found that women with lower scores on a test that measured how hydrated they were (called serum osmolarity) also scored lower on cognitive tests that measured recall, attention, mental processing speed, and verbal fluency.

So, if you're not already carrying around your own giant jug of water to sip from throughout the day, does this mean that you should be?

We asked Dr. Andrew Budson, a lecturer in neurology at Harvard Medical School and chief of cognitive and behavioral neurology at the VA Boston Healthcare System, for his thoughts on both this recent study and on how much water you should be drinking over all.

Q. What do you think of this recent study that showed a link between low water intake and poorer cognitive performance in women?

Dr. Budson: The study has some limitations that suggest that the findings should be viewed with some caution. The statistically significant results in the study — that the hydrated group scored better than the dehydrated group on tests of verbal fluency and processing speed — were found only in women and not in men. The authors speculated as to why these results would be present only in women. Another finding, not reported in the abstract, was that men in the normal hydration group scored lower than men in the dehydrated group on two different memory measures, immediate and delayed recall. The authors had no explanation for these results and referred to them as "spurious." When you combine these two results, the concern is that they may all simply be random and unreproducible. Although other research was able to confirm the results of this study, the cognitive improvements that researchers saw were very also small.

Q. How much water should women drink each day?

Dr. Budson: For those individuals who are having no problems with hydration, I don't recommend that they change their habits. Most healthy people are generally good at following the signals that their body sends as to when to drink, and their kidneys and other organs perform just fine.

However, individuals who are having problems with hydration — for example, those experiencing symptoms of dehydration, which include dark-colored urine, low blood pressure, weakness, dizziness, or confusion — may need to drink more. My simple recommendation for those who become easily dehydrated is to drink enough such that you have to urinate at least every two hours. If you don't need to urinate in two hours, you may not be drinking enough.

Q. Are there some people who need to be more careful about making sure that they drink enough water each day?

Dr. Budson: There are many reasons why people may develop problems with hydration. The most common reasons that I see in my practice are individuals with memory impairment who forget to drink liquids or eat meals.

Sometimes people will also deliberately drink less so that they will not need to find bathrooms when they are out of the house. This issue is particularly prominent for those older adults who have trouble with urinary incontinence. Family members can help by scouting out the bathrooms before they go on an outing, and also encouraging their loved ones to use the toilet every hour whether they feel like they need to urinate or not.

Individuals with cognitive impairment may also fail to make the necessary adjustments and drink more liquids when they are exercising or out on a hot day.

Women should also keep in mind that they will need to drink a little more if they regularly consume other drinks that make their body expel more water. Alcohol, tea, and coffee are liquids that are all diuretics, meaning that they may end up increasing your dehydration if you don't drink enough to compensate for the loss.