Atopic dermatitis, also called atopic eczema or just eczema, is a long-lasting inflammation of the skin. It is also called the "itch that rashes." The itch promotes scratching, scratching leads to further irritation, the irritation causes a rash, and so on in a continuous cycle.

Individuals with this form of eczema usually have hay fever, a food allergy, or some other allergy, or have a family member with one.

The rash changes with age. It is common in infancy, when it appears as inflamed, weeping patches or crusty areas on the face, neck, and groin. In childhood and adolescence, the rash is found mainly in the folds of the skin. In adults, it usually becomes limited to one area of the body, such as the hands.

Atopic dermatitis sometimes goes away on its own.

Symptoms of atopic dermatitis and eczema

Symptoms of atopic dermatitis and eczema are generally limited to the skin. They include: 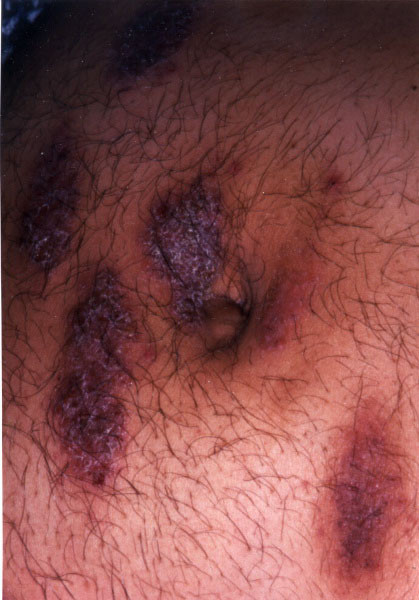 At times the condition may suddenly get worse. This is called a flare-up. Then the skin may heal and it looks as though the eczema has disappeared. This is called remission.

Trying not to scratch or rub the itchy area is an important part of treating this condition, though that it easier said than done. Scratching can break the skin, allowing bacteria, fungi, and other microbes to enter and cause infection. Moisturizing the skin can help prevent itchiness.

Applying a prescription corticosteroid cream or ointment to the rash can reduce itching and inflammation. It's best to use these immediately after showering or washing.

Antihistamines that reduce itching, like hydroxyzine (Vistaril, Atarax, others) can ease the urge to scratch the rash.

When other treatments don't work, drugs called immunomodulators may be needed. Two drugs in this class are tacrolimus (Protopic) and pimecrolimus (Elidel). These drugs, both applied as ointments, help keep the immune system from overreacting when stimulated.

Some people believe that a food allergy causes eczema or makes it worse, but this is still a controversial idea. Foods that have been linked to eczema include

There is no reliable test for identifying if a food is linked to eczema, nor is there a specific diet for treating it.

One way to experiment is to keep a diary of daily food intake and eczema symptoms. If you notice a connection between a particular food and worsening symptoms, stop eating that food for several weeks. If eczema fades away, perhaps it is connected. To make sure, try eating it again. If nothing happens, then the food may not have been playing a role. If eczema does return or worsen, then it may be linked.