Drugs in the water

Pharmaceutical pollution doesn't seem to be harming humans yet, but disturbing clues from aquatic life suggest now is the time for preventive action.

Although maybe not as tasty as an ice-cold gulp from a mountain spring, the water that flows through most American kitchen faucets is generally clean, clear, and safe. Approximately 170,000 public water systems are monitored for nearly 80 harmful substances. The prohibited nasties include bacteria, viruses, pesticides, petroleum products, strong acids, and some metals.

But water quality experts and environmental advocates are increasingly concerned about another kind of water pollution: chemicals from prescription drugs and over-the-counter medications that get into lakes, rivers, and streams. Water also gets contaminated by perfume, cologne, skin lotions, and sunscreens that wash off people's skin.

At this point, there's really no evidence of pharmaceutical and personal care products in the water harming people, but studies are showing adverse effects on aquatic life.

Drug take-back programs, which allow people to drop off their unused medications at central locations, serve two purposes. They keep unused drugs out of the water and prevent diversion of drugs, mainly the opioid painkillers, for recreation and illegal purposes.

Another step in the right direction is new guidelines from the federal Environmental Protection Agency (EPA) that discourage hospitals and nursing homes from flushing unused drugs down the drain or toilet. Guidelines for individuals also discourage flushing most, but not all, unused drugs. The question now is whether these and other efforts will be enough to keep the chemicals out of the water at a time when the use of pharmaceuticals and personal care products continues to grow at a rapid rate.

Reliable figures are hard to come by, but it's a safe assumption that we, as consumers, are responsible for a hefty percentage of the pharmaceutical and personal care products that wind up in lakes, rivers, and streams. The typical American medicine cabinet is full of unused and expired drugs, only a fraction of which get disposed of properly. Data collected from a medication collection program in California in 2007 suggest that about half of all medications — both prescription and over-the-counter — are discarded. That's probably a high-end estimate, but even if the real proportion is lower, there's a lot of unused medication that can potentially get into the water.

Chemicals also get into the water from the drugs we use. Our bodies metabolize only a fraction of most drugs we swallow. Most of the remainder is excreted in urine or feces (some is sweated out) and therefore gets into wastewater. An increasing number of medications are applied as creams or lotions, and the unabsorbed portions of those medications can contribute to the pollution problem when they get washed off. It's been calculated, for example, that one man's use of testosterone cream can wind up putting as much of the hormone into the water as the natural excretions from 300 men.

Health care institutions are another source of pharmaceutical water pollution. Hospitals are probably less of a problem than nursing homes because they typically have on-site pharmacies with arrangements in place to return unused drugs to manufacturers for credit or disposal. Nursing homes, though, have often been guilty of flushing medications down the toilet or drain after a patient dies or is transferred to another facility. Typically, they don't have the same kind of return arrangements as hospitals. And the rules for getting rid of opioid painkillers, which make disposal down the drain an acceptable option, have inadvertently encouraged some nursing homes to dispose of all their leftover medications that way.

Drug manufacturing also results in some pharmaceutical pollution, although some factories are bigger problem than others. For example, a U.S. Geological Survey study found contamination levels downstream from two drug manufacturing plants in New York State that were 10 to 1,000 times higher than those at comparable facilities around the country.

Agriculture is another major source. The two trillion pounds of animal waste generated by large-scale poultry and livestock operations in this country is laced with hormones and antibiotics fed to animals to make them grow faster and to keep them from getting sick. Inevitably, some of those hormones and antibiotics leach into groundwater or get into waterways. 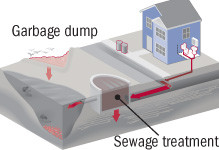 How bad is the problem?

A study conducted by the U.S. Geological Survey in 1999 and 2000 found measurable amounts of one or more medications in 80% of the water samples drawn from a network of 139 streams in 30 states. The drugs identified included a witches' brew of antibiotics, antidepressants, blood thinners, heart medications (ACE inhibitors, calcium-channel blockers, digoxin), hormones (estrogen, progesterone, testosterone), and painkillers. Scores of studies have been done since. Other drugs that have been found include caffeine (which, of course, comes from many other sources besides medications); carbamazepine, an antiseizure drug; fibrates, which improve cholesterol levels; and some fragrance chemicals (galaxolide and tonalide).

Sewage treatment plants are not currently designed to remove pharmaceuticals from water. Nor are the facilities that treat water to make it drinkable. Yet a certain amount of pharmaceutical contamination is removed when water gets treated for other purposes. For example, some research shows that conventional treatment methods result in a 90% decrease in the amount of ibuprofen and naproxen in the water discharged from sewage treatment plants. On the other hand, treatment doesn't seem to have much effect on the levels of drugs such as carbamazepine and diclofenac (a pain reliever).

Some aspects of sewage treatment may remove pharmaceuticals from the water, but as a result, concentrations in sludge increase. Some of that sludge is used as fertilizer, so the pharmaceuticals are getting into the environment in another way.

Drinking-water treatment may also get rid of some pharmaceutical contamination. Chlorine is used to kill bacteria and other pathogens, but it also seems to degrade or remove acetaminophen, codeine, and the antibiotic sulfathiazole. A 2007 study of one drinking-water plant found that conventional treatment methods reduced the concentrations of several important medications (acetaminophen, carbamazepine) by 75%.

Still, there's really not much question that some pharmaceutical pollution persists and does wind up in the water we drink. In 2008, the Associated Press published a series of investigative articles about pharmaceutical contamination in drinking water. The journalists uncovered test results that showed the water supplies for 24 major metropolitan areas had detectable levels of pharmaceuticals. Scientists from the Southern Nevada Water Authority and other organizations reported results in 2010 from a study analyzing drinking water from 19 treatment plants. Their tests found antidepressants, antipsychotics, antibiotics, beta blockers, and tranquilizers, although only in trace amounts and far below levels thought to have an effect on humans.

It's possible that there's a cumulative effect on people from even tiny amounts of these and other pharmaceuticals in drinking water, but this hasn't been proven. And perhaps vulnerable populations (pregnant women, people with disabilities) are affected, although that's also unproven.

Effects on fish and wildlife

In contrast to the uncertainty about human health effects, there's quite a bit of evidence for pharmaceuticals in the water affecting aquatic life, particularly fish. Numerous studies have shown that estrogen and chemicals that behave like it have a feminizing effect on male fish and can alter female-to-male ratios. Sources of estrogen include birth control pills and postmenopausal hormone treatments, as well as the estrogen that women produce naturally and excrete. Intersex fish — creatures with both male and female sex characteristics — have been found in heavily polluted sections of the Potomac River. Studies of fish upstream and downstream of wastewater treatment plants have found more female and intersex fish downstream from the plants, presumably because of the higher estrogen levels in the downstream water. Other research has uncovered popular antidepressant medications concentrated in the brain tissue of fish downstream from wastewater treatment plants.

What is being done

On a larger scale, the EPA has taken a four-pronged approach that involves public education, stepped-up monitoring of water supplies, partnerships with health care facilities and agribusinesses to reduce waste, and eventually, perhaps, new regulations. As an introductory step toward possible regulation, the EPA has added 10 pharmaceutical compounds — one antibiotic and nine hormones — to its watch list of potentially harmful contaminants that warrant greater investigation.

The Natural Resources Defense Council, an environmental group, has called on drug manufacturers to design "eco-friendly" drugs that are absorbed by the body more efficiently or will break down in the environment after they're excreted. The organization has also asked companies to implement techniques to limit bioactive waste generated in their manufacturing processes.