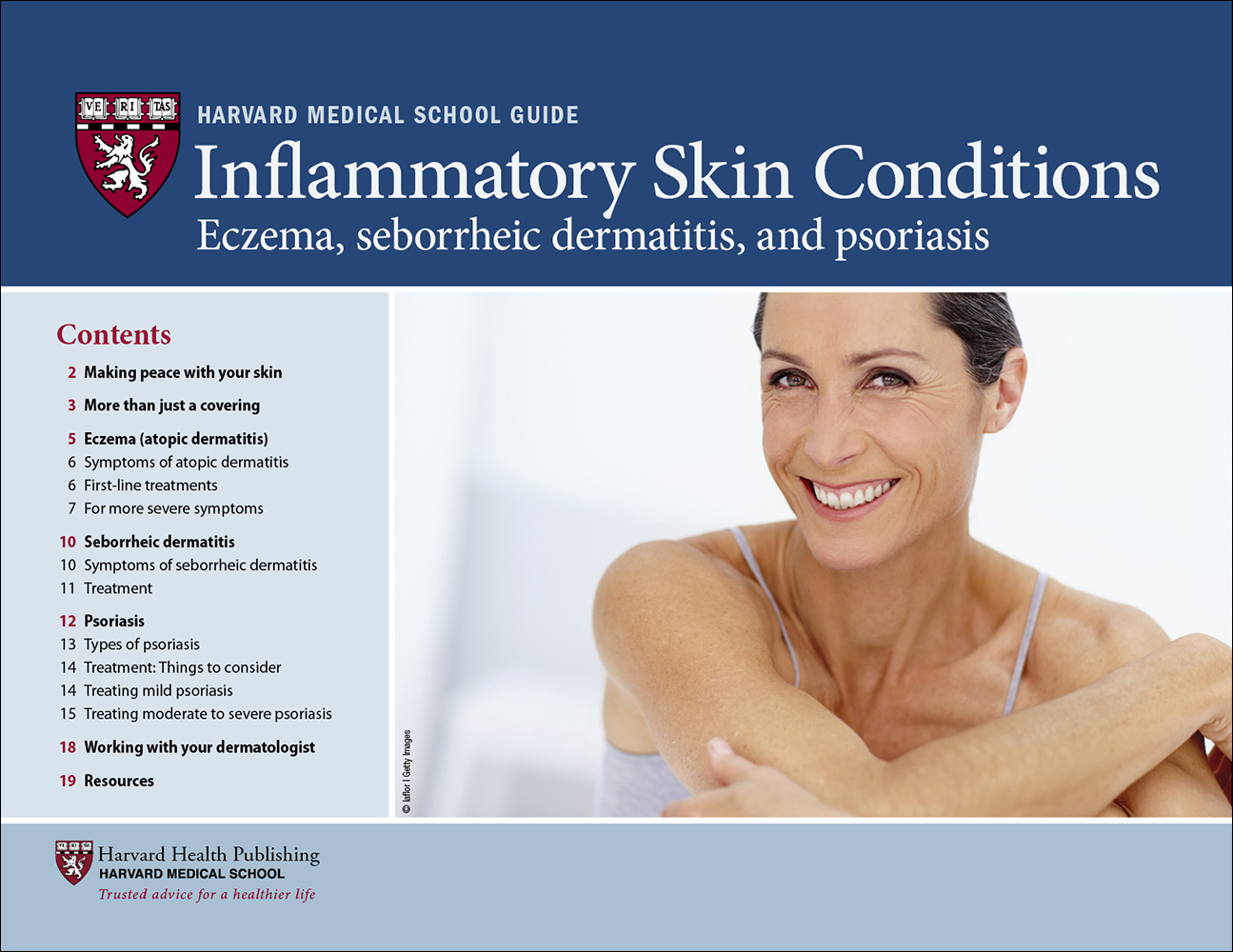 You’ve probably heard the expression “feeling comfortable in your own skin.” For people with inflammatory skin conditions such as eczema, seborrheic dermatitis, or psoriasis, that can be challenging.

It’s not just the physical discomfort of itching and flaking skin. There is a psychological burden as well. During the worst flares, you may feel self-conscious or alone, isolated in your suffering.

In fact, many people have these conditions. The most common form of eczema, atopic dermatitis, affects five million to 7.5 million American adults. Another 7.5 million people, most of them adults, have psoriasis. And about 12.5 million adults have seborrheic dermatitis, in which the most common symptom is dandruff. If you have one of these disorders, know that you are not alone.

Moreover, there’s much you can do to tame the inflammation that underlies all three of the conditions described in this guide. Some of the best care begins at home, with gentle skin care routines and other practical steps to manage each condition. If further treatment is needed, you can work in partnership with your dermatologist, a skin specialist, to determine the best treatment plan.

There is no one-size-fits-all approach to managing any of the skin conditions covered in this guide. It may take some trial and error, but chances are that you will find a strategy that works for you. This guide will help you understand your options. You’ll learn about what causes eczema, seborrheic dermatitis, and psoriasis; typical symptoms of each; how these conditions are diagnosed and treated; and what you can do on your own (and with your doctor) to manage them.

Several forms of psoriasis exist. While distinct, they may overlap in particular individuals.

Plaque psoriasis
This is the most common type of psoriasis. Although it can develop at any age, it most commonly appears from young adulthood to middle age. Symptoms include raised patches of red, inflamed skin, covered with silvery-white flaky scales. Plaques may crack, ooze, and bleed. They can develop anywhere, but are most common on elbows and knees. They also commonly develop on the scalp. Affected areas may itch or hurt.

Guttate psoriasis
This type of psoriasis usually develops suddenly in childhood or adolescence. It may be triggered by an infection, usually strep throat. Guttate psoriasis is characterized by small red, scaly bumps that are scattered across the arms and torso (including the back, chest, and abdomen).

Inverse (intertriginous) psoriasis
This form of psoriasis typically appears in folds of skin, such as under the arm, behind the knee, under the breasts, or in the groin area. Symptoms include bright red areas on the skin that may be shiny and smooth. Inverse psoriasis can occur at the same time as other forms of psoriasis. It is sometimes mistaken for a fungal or yeast infection of the skin.

Pustular psoriasis
In this type of psoriasis, pus-filled blisters (pustules) develop on red, inflamed skin. This type of psoriasis most often affects the hands and feet. It is most common in adults. Symptoms include pustules on the palms or fingers, or on the soles of the feet or toes. These pustules may crack and cause painful fissures in the skin.

A rare but life-threatening subtype of pustular psoriasis, von Zumbusch psoriasis, requires immediate medical attention. In this condition, large areas of fiery red, painful skin spread quickly over much of your body. Pustules develop soon afterwards. Your skin may peel off in sheets, and you may develop fever and chills. This type of psoriasis requires immediate medical attention, as it can disrupt the skin’s ability to maintain internal temperature and can lead to shock. It’s also known as acute generalized pustular psoriasis.

Nail psoriasis
When psoriasis affects the nails, it may cause a scattering of pits, similar to pinpricks, across the nail. It may also cause brown “oil spots” to appear on the nail or cause the nail to separate from its bed. In the most severe cases, nails may grow thick and crumble.