What is GERD or Gastroesophageal reflux disease

Most people know gastroesophageal reflux disease (GERD) by its most common symptom: heartburn.

GERD occurs when the muscle that connects the esophagus to the stomach fails to do its job. This muscle is called the lower esophageal sphincter. Normally, it opens to allow food to pass into the stomach, then closes to keep food and acidic stomach juices from flowing back into the esophagus. When the sphincter relaxes too much, irritating stomach fluids surge up into the esophagus, sometimes causing inflammation and the painful burning sensation behind the breastbone known as heartburn.

Heartburn can be extremely painful, but it is not a serious threat to your health.

Heartburn is the most common symptom of GERD. The burning sensation is usually felt in the chest just behind the breastbone. It often extends from the lower end of the rib cage to the root of the neck and can last for hours.

Other symptoms of GERD may include:

Your description of your pain and other symptoms, as well as your overall health, are important to making a diagnosis. Your doctor might ask whether your symptoms are worse after you eat a heavy meal or known dietary troublemakers such as high-fat foods or dairy products. He or she might also ask if bending over to tie your shoelaces or lying down aggravates the symptoms.

More serious reflux symptoms, such as bleeding from the esophagus or swallowing problems, might warrant further investigation. Individuals who don't find relief with medications might also benefit from testing.

Diet and lifestyle changes are the foundation for treating the symptoms of reflux: 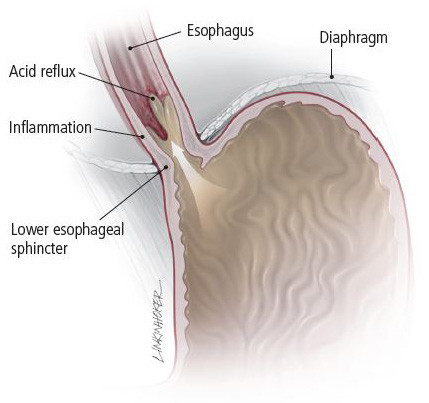 Eat smaller meals. A large meal remains in the stomach for several hours, increasing the chances for reflux. Eat several small meals throughout the day, rather than three large meals.

Avoid eating within three hours of going to bed. Do not eat just before bedtime.

Lose weight, if needed. Extra pounds increase pressure on the stomach and can push acid into the esophagus.

Loosen up. Avoid tight belts, waistbands, and other clothing that puts pressure on your stomach.

Chew gum. This increases saliva production, soothing the esophagus and washing acid back down to the stomach.

Raise the head of your bed. If you're bothered by nighttime heartburn, elevate the head of your bed by placing a wedge (available in medical supply stores) under your upper body. Don't elevate your head with extra pillows. That makes reflux worse by bending you at the waist and compressing your stomach.

Exercise wisely. Wait at least two hours after a meal before exercising.

Histamine H2-receptor antagonists (H2 blockers). H2 blockers are often effective for symptoms that don't respond to antacids or lifestyle changes. They are also useful for long-term maintenance after a course of proton pump inhibitors has eased symptoms. H2 blockers act directly on the stomach's acid-secreting cells to stop them from making acid. They are widely available either by prescription or over the counter.

Antacids. These inexpensive over-the-counter remedies neutralize digestive acids in the stomach and esophagus, at least in mild cases of heartburn. The best time to take an antacid is after a meal or when symptoms occur.

Prokinetic agents. Prokinetics help empty the stomach of acids and fluids. They can also improve muscle tone in the lower esophageal sphincter. These medications are used mainly when GERD is caused by the stomach emptying slowly.

Herbs and other natural remedies may be helpful for treating heartburn symptoms.

Chamomile. A cup of chamomile tea may have a soothing effect on the digestive tract.

Ginger. The root of the ginger plant is another well-known herbal digestive aid. It has been a folk remedy for heartburn for centuries.

Licorice. This remedy has proved effective in several studies. Licorice is said to increase the mucous coating of the esophageal lining, helping it resist the irritating effects of stomach acid. Deglycyrrhizinated licorice is available in pill or liquid form. It is considered safe to take indefinitely.

Most cases of GERD can be managed successfully with lifestyle changes and medications. But for some people, surgery is a good option.

The goal of surgery is to tighten the lower esophageal sphincter. The operations are generally effective and can eliminate the need for all GERD medications for some time. Eventually, however, many people need to resume medications and, in a small number of cases, undergo surgery to redo the procedure.

Partial fundoplication, in which the stomach is wrapped only partway around the esophagus, is another option.

Today, most surgeons perform fundoplication as a laparoscopic procedure. That means special instruments and cameras are inserted into tiny incisions in the upper abdomen.