An aneurysm is an abnormal swelling in part of an artery. It occurs where a patch of the artery has become weak, letting it balloon out. An aneurysm can burst, creating serious internal bleeding.

Aneurysms most often occur in the body’s largest artery, the aorta. There are two types of aortic aneurysm:

If an aortic aneurysm bursts, it can cause dangerous bleeding, or even death.

Aneurysms usually form at a spot on the aorta wall weakened by atherosclerosis and long-standing high blood pressure. Eventually, the force of the pounding blood stretches and weakens the damaged spot on the aorta.

Aortic aneurysms are more common in people with severe chronic bronchitis and emphysema caused by smoking. About 3% of people between ages 65 and 80 have an abdominal aortic aneurysm.

There is also a clear genetic component to aneurysms, demonstrated by the fact that they are far more common in men and in people who have close relatives with the same problem. Infections such as advanced syphilis can also damage the aorta, leading to an aneurysm.

A small number of people suffer from an inherited connective tissue disorder called Marfan syndrome, which increases their susceptibility to developing aneurysms (even if they do not have atherosclerosis).

A problem related to aneurysms is aortic dissection, in which blood pushes its way into the middle of the wall of the aorta. The blood separates the inner wall from the outer wall and can push its way down the whole length in a matter of seconds. It, too, stems from the degeneration of the wall of the artery.

Aortic dissection almost always occurs in people who have long-standing high blood pressure. The area of dissection is weak and can rupture, leading to catastrophic internal bleeding.

Aortic aneurysms often don't cause any symptoms—unless they rupture. They are often discovered during a routine physical exam or an imaging procedure such as an ultrasound, computed tomography, magnetic resonance imaging, or x-ray for an unrelated problem.

Large thoracic aneurysms may cause chest or back pain, shortness of breath, hoarseness, coughing, or a feeling that you are full after eating just a little.

When an aortic aneurysm ruptures, it may cause severe stabbing pain, often followed by loss of consciousness. The loss of blood into the chest or abdomen results in shock. About 80% of people who have a ruptured aneurysm die, half of them before reaching the hospital.

For smaller aneurysms, the strategy is to undergo periodic imaging to gauge how fast it is expanding. If it is growing rapidly, you may need to have it repaired immediately.

There are two main treatments for an aortic aneurysm: surgery or stent grafting.

Surgery involves an open operation to replace the damaged part of the aorta with a tube of synthetic material. Because most candidates for aneurysm surgery already have extensive cardiovascular disease, there is a 4% rate of heart complications from the operation. This is double the rate for most other kinds of surgery.

Stent grafting is done without opening the chest or abdomen. Instead, a doctor makes an incision in the skin at the groin and passes a thin tube called a catheter into the femoral artery. Using imaging, he or she gently maneuvers the tube into the aneurysm. Once in place, a small balloon at the end of the catheter is opened, expanding the small graft made of synthetic material wrapped around it. After the balloon is deflated, the graft stays in the artery. All of the pressure in the blood pushes against the walls of this tube, and not against the weakened section of the aorta, reducing the chance of a rupture.

Should I be worried about fatty liver disease? 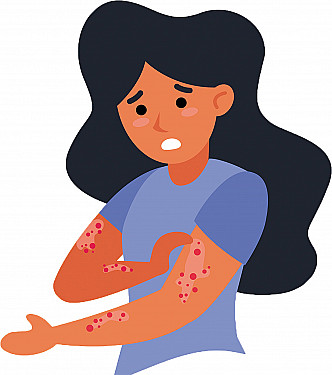 Taming the chronic inflammation of psoriasis