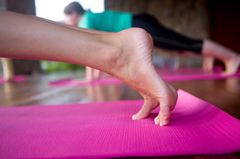 I wrote a blog post earlier this month about two studies that suggest yoga is good medicine for bad backs, although in one of the studies stretching exercises were equally effective.

Yoga came up during my interview with Australian researcher Hylton Menz, one of my sources for the front-page article about foot pain and problems and how they might lead to falls for the November 2011 issue of the Harvard Health Letter. Sure, there isn’t a lot of research to go on, conceded Menz. But yoga seems to be a good way to keep your feet strong and flexible, he explained, and so probably helps with staying on them.

Yoga was also endorsed as a possible treatment for migraine by Dr. Paul B. Rizzoli, co-author of The Migraine Solution, a book being published by Harvard Health Publishing and St. Martin’s Press, which is scheduled to come out in January 2012. Near the end of an interview in his office at the John R. Graham Headache Center at Faulkner Hospital in Boston, I was asking Dr. Rizzoli about ways to treat migraines that didn’t involve taking a medication—everything that comes under that nebulous “alternative medicine” heading. Yoga is a personal favorite of his for his patients, said Dr. Rizzoli, because it is widely available, affordable, and very likely has benefits beyond migraine.

Biofeedback may have more supporting evidence, he told me, but the problem with biofeedback is that it’s neither widely available nor reliably covered by health insurance.

We’ve written a lot about yoga here at Harvard Health Publishing. My colleagues at the Harvard Mental Health Letter published a piece about yoga for anxiety and depression two years ago. The Harvard Heart Letter was cautiously optimistic last year about what yoga could do for your heart. And my next-door neighbors at the Harvard Women’s Health Watch have reported on yoga’s benefits for women’s sexual function and back pain.