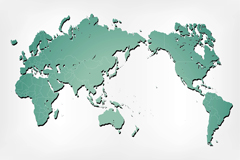 The term “stroke” conjures up a frightening bolt out of the blue. It certainly feels that way when it happens. But the sudden onset hides most strokes’ decades-long development stemming from slow but steady damage to blood vessels, the growth of artery-clogging plaque, or the erratic heart rhythm known as atrial fibrillation. This long gestation means it is often possible to avoid a stroke by fighting arterial corrosion.

Today is World Stroke Day—a moment to pay close attention to stroke. Worldwide, this brain-damaging condition afflicts millions of people each year, and kills more than 6 million. In the United States, about 800,000 people have strokes each year, and about 140,000 die from them. The dual messages of World Stroke Day are:

World Stroke Day also highlights the efforts of those who care for loved ones in the aftermath of a stroke. You can read stories from survivors and caregivers on the World Stroke Organization’s website.

A stroke occurs when blood stops flowing to part of the brain. Cut off from their supply of oxygen, brain cells begin dying within minutes. Some strokes are deadly; most are not. The American Heart Association estimates that there are more than six million stroke survivors in the United States. Although some have no physical or mental reminders of the attack, many have long-lasting speech loss, paralysis, or other problems. In fact, stroke is a leading cause of disability — nearly one in three survivors is permanently disabled, and many more need long-term care.

Ischemic strokes occur when a blood clot or other debris blocks a blood vessel in the brain or one leading to it. These account for more than 80% of strokes. The rest are hemorrhagic strokes. These occur when a blood vessel in the brain bursts. The bleeding (hemorrhaging) deprives downstream brain cells of oxygenated blood and can also damage cells by increasing pressure inside the brain.

Though ischemic and hemorrhagic strokes require different treatments once they appear, efforts to prevent them are very similar.

Stroke has several telltale symptoms and warning signs. If you notice one or more of the signs below in yourself or someone else, or you’re worried that you or someone you are with is having a stroke, call 911 or your local emergency number right away:

You can fight stroke on many fronts. A single thrust is good; a many-pronged attack is even better. Here are 10 things you can do to stay stroke-free:

Starting early is best. Acquiring healthy habits in childhood, the early teens, or young adulthood sets the stage for a healthy adulthood and old age. But if you are tardy in joining the prevention party, it isn’t too late. Even small steps now can improve your health.

(Parts of this article first appeared in the March 2011 Harvard Heart Letter.)