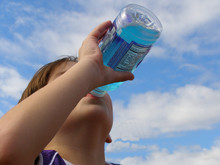 Nicely timed for the 2012 Olympic Games in London, the British Medical Journal (BMJ) has published several articles revealing the “truth about sports drinks.” That truth is this: drink when you are thirsty and don’t waste your money or calories on sports drinks—choose water instead.

Sports drinks are flavored beverages that contain carbohydrates (usually sugar) and minerals such as sodium and potassium. Those minerals are generally referred to as electrolytes.

The granddaddy of sports drinks is Gatorade, a beverage created in the 1960s for the University of Florida Gators football team. The British Medical Journal says it “started life as a simple mixture of kitchen foodstuffs” like water, salt, sugar, and lemon flavoring. It’s more complicated than that today. The industry is now dominated by multinational companies like Pepsi and drug companies like GSK. In the United States alone, sales of sports drinks exceed $1.5 billion a year.

Before the rise of sports drinks, athletes (and the rest of us) drank water when we exercised or got sweaty. How did we know when to drink, or how much? The way humans have known for eons—thirst. But as the BMJ team describes, sports drink makers spent a lot of money sponsoring less-than-rigorous research damning thirst as a guide to hydration and casting doubt on water as the beverage for staying hydrated. To make matters worse, recommendations once aimed at endurance athletes have now trickled down to anyone who exercises.

There is no evidence that dehydration has ever killed a marathoner, Dr. Arthur Siegel, associate professor of medicine at Harvard Medical School and a medical advisor to the Boston Marathon, told the BMJ. But the drumbeat that athletes must stay fully hydrated and drink before they become thirsty has spawned a new problem—overhydration. That’s what killed a healthy, 28-year-old woman during the 2002 Boston Marathon. She collapsed a few miles short of the finish line and died a day later. The cause of death was hyponatremia—too little sodium in her blood caused by drinking too much fluid before and during the marathon. According to the BMJ, 16 marathoners have died and more than 1,600 have become critically ill due to overhydration and hyponatremia.

I asked Dr. Francis Wang, the team physician for Harvard athletics, what he tells athletes about thirst and fluids. “For most players, thirst is a good guide for hydration,” he said. Athletes who have had muscle cramps may need to drink extra, and may need more electrolytes.

What about the rest of us, who may run a couple miles in the morning or play a few sets of tennis? Thirst should be our guide, and water our beverage.

One concern with sports drinks is that they deliver unneeded calories. Some contain 150 calories, the equivalent of 10 teaspoons of sugar. Children definitely don’t need sports drinks, says Dr. Claire McCarthy, an assistant professor of pediatrics at Harvard Medical School. As for adults, Tim Noakes, professor of exercise and sports science at University of Cape Town in South Africa told the BMJ, far from turning casual runners into Olympic athletes, “If they avoided the sports drinks they would get thinner and run faster.”