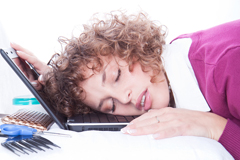 It always takes me a few days to get used to Daylight Saving Time. While I love the extra hour of light at the end of the day, I’m not so wild about the extra hour of darkness in the morning or waking up an hour earlier than I need to. And I sure miss the hour of sleep I lost yesterday.

That lost hour seems to be a big deal. A report in this month’s American Journal of Cardiology details the jump in heart attacks seen in a large Michigan hospital the first week after the start of Daylight Saving Time, and the small decline after it ends in the fall. A few years back, researchers showed a similar pattern in Sweden. The number of traffic accidents are similarly affected. In a Canadian study, there were more accidents on the Monday after the start of Daylight Saving Time than there were on the Monday the week before the change.

No one knows for sure why losing one hour of sleep might generate more heart attacks or accidents. It could be a disruption in the body’s circadian rhythm, which controls hormone levels and many other physiologic underpinnings of health, as well as alertness.

If ever there was a perfect day for a nap, today would be it. A single nap won’t fully reset your body clock or make up for a lost hour of sleep, but it can help. It’s also a good way to stay sharp, especially in the afternoon.

A few years back, nap champion William A. Anthony, then professor of rehabilitation counseling at Boston University, proclaimed the Monday after the start of Daylight Saving Time as “National Napping Day.” It was part publicity stunt to promote The Napping Company, a business he founded with his wife, Camille Anthony to bring napping into business world to improve productivity.

But napping does make sense, not just today, but almost any day. Although the effects of napping on physical health are all over the map, it’s clear that napping can help improve learning and creativity.

Several leading researchers in this area, including Harvard’s Dr. Robert Stickgold, have suggested that the latest findings on napping should prompt employer policies that encourage napping. Stickgold directs the Center for Sleep and Cognition at Harvard-affiliated Beth Israel Deaconess Medical Center. A few companies have toyed with the idea—Google set up “nap pods” that block out light and sound—but napping on the job is still largely frowned upon, and few promote it.

Harvard Health Publishing doesn’t have an explicit policy on napping. Since I have an office with a door that closes, and an extremely comfortable chair, this afternoon I plan to turn down the lights, sit quietly for a bit—and become more creative!

How to take a good nap

As described in an article on the potential benefits of napping in the Harvard Heart Letter, here are some tips for taking a refreshing nap:

Keep it short. A 20- to 30-minute nap may be the ideal pick-me-up. Even just napping for a few minutes has benefits. Longer naps can lead to sleep inertia — the post-sleep grogginess that can be difficult to shake off.

Find a dark, quiet, cool place. You don’t want to waste a lot of time getting to sleep. Reducing light and noise helps most people nod off faster. Cool temperatures are helpful, too.

Plan on it. Waiting till daytime sleepiness gets so bad that you have to take a nap can be uncomfortable and dangerous if, say, you’re driving. A regular nap time may also help you get to sleep faster and wake up quicker.

Time your caffeine. Caffeine takes some time to kick in. A small Japanese study published several years ago found that drinking a caffeinated beverage and then taking a short nap immediately afterward was the most restful combination because the sleep occurred just before the caffeine took effect. We’re not so sure about that approach — the mere suggestion of caffeine, in the form of coffee taste or smell, wakes us up. Regardless of the exact timing, you need to coordinate caffeine intake with your nap.

Don’t feel guilty! The well-timed nap can make you more productive at work and at home.