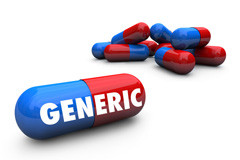 Over a dozen top-selling brand-name drugs have lost, or are about to lose, patent protection, which means other companies can step in and sell less expensive, generic versions of the same drug.

Brand-name drugs that lost patent protection last year include Caduet, a blood pressure medication; Zyprexa, an antipsychotic used to treat schizophrenia and bipolar disorder; and, most significantly, because it’s such a big seller, Lipitor, a cholesterol–lowering statin drug.

Actos, a diabetes drug; Plavix, a drug which prevents heart attacks and strokes by making blood platelets less “sticky”; and Singulair, an important asthma drug, are among those scheduled to lose patent protection this year.

Drug company executives have seen sales and profits plunge as their products fall off the “patent cliff.” Many companies have retrenched and announced large layoffs.

Is their loss our gain?

Generics are less expensive. If you have insurance, your copayment will be lower.

But many people are worried about changing from brand-name drugs, marketed by familiar companies like Pfizer and Eli Lilly, to “no-name” generic ones marketed by companies that only industry insiders have heard of.

Dr. Anthony Komaroff, editor in chief of the Harvard Health Letter, tackles the brand-versus-generic issue in the February 2012 issue in an answer to a reader’s more specific question about switching to the generic version of Lipitor.

The FDA is legally required to determine that generic products are “bioequivalent” to brand-name drugs, which means that they produce similar blood concentrations of the same chemical, Dr. Komaroff notes in the “Ask the Doctor” column of the Health Letter.

Independent researchers have compared generics and brand-name drugs, and the vast majority have concluded that the generic versions are just as safe and effective as the brand-name drugs, says Dr. Komaroff, citing as an example an analysis of 47 studies of various heart medicines conducted by a Harvard colleague, Dr. Aaron Kesselheim.

(Dr. Kesselheim’s analysis did not include a comparison of generic atorvastatin with Lipitor. But more recent research has, and it showed that they were equally effective at improving cholesterol levels, according to Dr. Komaroff.)

Some people are troubled by the fact that many generic drugs are manufactured overseas. Dr. Komaroff’s response: the FDA regulates the manufacture of all drugs sold in the United States, which is reassuring, but that the agency hasn’t been given the budget it needs to adequately carry out its responsibility.

The takeaway: “I’ll be switching”

Here’s Dr. Komaroff’s bottom line about whether it makes sense to switch to the generic version of Lipitor:

So I can’t give you an absolute guarantee that generic atorvastatin will be equal to brand-name Lipitor. But I can tell you this: I take Lipitor and I’ll be switching to generic atorvastatin, so I will be following my own advice (something my wife has suggested that I should do more often).

You can read the complete article on the Harvard Health website.