Study renews caution on painkiller use after heart attack 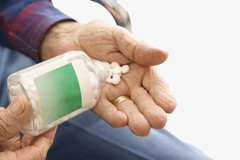 Some pretty scary headlines—”NSAIDs following a heart attack greatly increase risk of a repeat heart attack” and “Painkillers risky for heart attack patients,” for example—accompanied the latest study looking at possible cardiovascular effects of common painkillers. The gist of the headlines and the stories they introduce is right, but the size of the risk is small.

The new study, from Denmark, looked at the use of nonsteroidal anti-inflammatory drugs (NSAIDs) by heart attack survivors. NSAIDs include ibuprofen (Advil, Motrin), naproxen (Aleve, Naprosyn), diclofenac (Voltaren), Celebrex, and others. The study was designed to test a warning from the American Heart Association (AHA) in 2007 that people with heart disease should use NSAIDs for pain relief only when there aren’t appropriate alternatives and then “only in the lowest dose and for the shortest duration.” The AHA sounded this caution based on several studies showing links between NSAID use and heart attack.

The Danish researchers found that sometimes the “shortest duration” may be “not at all.” Among 84,000 heart attack survivors, those who started taking an NSAID at some point after their attacks were more likely to have had a second heart attack or to have died during the 14-week period after beginning the painkiller. Some deaths or repeat heart attacks happened within a few days of starting an NSAID.

The researchers calculated that the increased risk of dying or having a repeat heart attack was 45% within a week or so after starting the medication and 55% after 90 days. Diclofenac posed the greatest risk; naproxen the least. The results were published online in the journal Circulation.

These numbers sound frightening, as if half of the people who took an NSAID died or had a repeat heart attack. That wasn’t the case. The rate of dying or having another heart attack over the 14-week follow-up period was 5 to 6 per 10,000 people per year among those taking NSAIDs, compared with 3 and 4 per 10,000 people per year across the entire study group (those who didn’t take NSAIDs plus those who did). The difference between these two rates represents the 45% to 55% increase.

Is this study worth paying attention to? It is, says Dr. Elliott M. Antman, lead author of the AHA’s recommendations on NSAID use. “The results confirm the recommendation to take the safest drug, in the lowest dose required to control the symptoms, and for the shortest period of time,” said Dr. Antman, who is a professor of medicine at Harvard Medical School. “Patients should also tell their physicians about drugs they obtain over the counter in addition to the ones they receive by prescription.”

Dr. Robert Shmerling, a rheumatologist at Harvard-affiliated Beth Israel Deaconess Medical Center, agrees. “There is cause for concern, as there are now several studies and meta-analyses with similar findings,” he said in an email. “But for people in pain, an NSAID is sometimes the best option for a painkiller.”

If you have had a heart attack or been diagnosed with coronary artery disease and have pain from an injury, healing surgery scars, or a chronic condition like arthritis, try the American Heart Association’s step-wide approach to easing pain:

Start with a nondrug treatment first, like ice or heat.

Next try aspirin or acetaminophen (Tylenol). Both have drawbacks—gastrointestinal upset and bleeding with aspirin, potential liver damage with doses of acetaminophen above 4,000 milligrams a day—but no negative effects on the heart.

Still no relief? Try one of the cousins to aspirin, called nonacetylated salicylates, such as salsalate (Disalcid).

The next step up the ladder is an NSAID. Try naproxen first, since it seems to have the fewest effects on the cardiovascular system.

thank you for sharing ur info with us

Very informative and facts about NSAIDS.