Simple steps for avoiding infections from dogs and cats 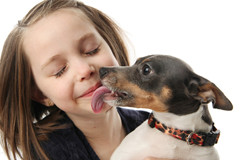 “Ugh! I’ve been kissed by a dog! I have dog germs! Get hot water! Get some disinfectant! Get some iodine!”—Lucy, after being licked by Snoopy in A Charlie Brown Christmas

Americans share their households with an estimated 140 million dogs and cats. For the truly pet-centric among us, these creatures are family members, plain and simple. In addition to delivering that most elusive unconditional love, pet ownership confers several health benefits—including lower blood pressure and cholesterol levels—and increased opportunities for exercise and socialization.

Lucy may have overreacted after being smooched by Snoopy, but dogs and cats can transmit disease to people, either directly through licks, bites, and scratches; indirectly by carrying other infection-laden critters like fleas and ticks into the human environment, or by shedding tiny infectious organisms into our environment through feces. As a group, these diseases are called zoonoses (ZOH-uh-NOE-sees).

Most of the diseases we pick up from dogs and cats arise from bacteria, single-celled and wormlike parasites, and one virus (rabies). People with compromised immune systems (such as those with AIDS or those taking drugs to ward off rejection after receiving an organ transplant) and kids are at the highest risk of becoming sick with such ailments

The list of diseases transmissible from dogs and cats to people is quite long, but the risk of getting sick from such conditions is low—especially if you take a few simple precautions.

While it is more likely that you’ll receive germs causing human disease while shaking hands than when getting smooched by a dog, saliva from a cat or dog—delivered via an affectionate lick, an accidental or aggressive bite, or a defensive scratch—may contain organisms that can cause illness if they penetrate the skin or come in contact with the mucous membranes of the mouth, nose, or eyes. The dog or cat that unknowingly transmits these germs usually shows no signs of illness. But once inside a human, these bacteria can cause skin infections, flu-like symptoms such as fever and chills, and more serious diseases such as meningitis.

The rabies virus is the most dangerous saliva-borne germ a cat or dog can bestow on a person. Thankfully, rabies in people is very rare in the U.S. (only 47 cases were reported between 1990 and 2005), and most of those cases are attributed to bites from wild animals such as bats and raccoons. One reason dogs and cats so rarely transmit rabies is our nation’s highly effective pet-vaccination programs.

A fastidious cat that cleans its paws with its abrasive tongue can transfer bacteria belonging to the bartonella family from its mouth to its claws. In such a case, a bite or a scratch can cause cat-scratch disease, which usually causes localized lymph node swelling near the injury site but can progressively affect the liver, eyes, or central nervous system.

Here are a few ways to avoid saliva-borne infections:

No one in their right mind intentionally touches or ingests dog or cat poop, but people can nevertheless expose themselves to several nasty disease-causing agents from it via contaminated soil or water. These include salmonella, a bacteria that humans more commonly get from contaminated food, and giardia, a single-celled parasite that can cause severe diarrhea.

Also, the eggs of intestinal worms—including roundworms, hookworms, and tapeworms—are commonly shed in animal feces, and people who accidentally ingest them can get become ill. Only the tapeworm can develop into an adult parasite in the human intestine, but the other worms in immature form can migrate to the skin, eyes, and other organs.

As if that weren’t enough, cat feces can carry a microscopic parasite (Toxoplasma gondii) that causes enlarged lymph nodes. Infected people usually don’t show symptoms, unless they have a weak immune system. Most important, women infected with toxoplasma during pregnancy can transmit the parasite to their developing fetus.

Here are a few precautions to take:

The fleas and ticks that get a free ride and feed on domestic dogs and cats can also feed on humans, though they prefer hairier mammals. During feeding, those insects can transmit the germs that cause Lyme disease, ehrlichiosis (characterized by fever and headache), the malaria-like infection known as babesiosis, and even plague, most human cases of which occur in the Southwest U.S.

The bottom line with pets, people, and disease is this: Practice good hand washing and other common-sense personal hygiene measures, and give your pets good veterinary care. That will further reduce the already low risk of getting an unwanted ailment courtesy of your “best friend.”