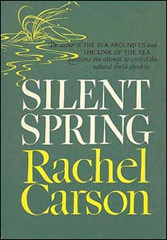 Fifty years ago this week, the first installment of Silent Spring appeared in the pages of The New Yorker. Rachel Carson’s provocative warning about the danger of indiscriminate pesticide use opened gently:

“There was once a town in the heart of America where all life seemed to be in harmony with its surroundings.”

But it quickly built to a sustained, meticulously reported account of the toll that widespread aerial spraying of DDT, dieldrin, aldrin, chlordane, heptachlor, and other synthetic pesticides was taking on birds, raccoons, fish, bees, and even the supposed beneficiaries of spraying—humans.

Silent Spring is often portrayed as a book about saving birds and other wildlife. Another important theme is the essential but fragile connections between environmental health and human health.

“Rachel Carson was one of the first people, if not the first, talking about ecological change as a result of human activity and how those changes could circle back and affect human health,” says Dr. Eric Chivian, the founder and director of the Center for Health and the Global Environment at Harvard Medical School.

For example, Carson reported that residues of synthetic pesticides, which linger in soil, water, and the body, “are now stored in the vast majority of human beings. They occur in mother’s milk, and probably in the tissues of the unborn child.” A Time magazine reviewer chided her for this and other “emotional and inaccurate outbursts” which would only “do harm by alarming the nontechnical public.”

Carson’s warning was neither emotional nor inaccurate. And it has since been borne out in studies of pesticides and other synthetic compounds. Take polychlorinated biphenyls, or PCBs, which were widely used as coolants and lubricants in transformers and electric motors. Although the Environmental Protection Agency banned the use of PCBs in the United States in 1979, we still carry them in our bodies. Precisely how pesticide residues and other persistent pollutants affect human health is still a matter of debate.

I first read Silent Spring a few weeks after the first Earth Day. As a naïve city kid, it got me thinking about the natural world, the balance of nature, and what we were doing to our planet. I just read the book again, prompted by several articles in the Spring 2012 issue of Sanctuary, the journal of the Massachusetts Audubon Society. Its messages are still timely and important. (Over the weekend I read in my local newspaper about plans for aerial spraying against mosquitoes in southeastern Massachusetts.)

This time, though, I was struck by Carson’s careful and detailed reporting. She relied on interviews, correspondence with scientists, newspaper reports, articles in scientific and trade journals, and governmental reports—more than 500 citations listed in her “list of principal sources.” It’s a masterful marshaling of evidence.

Carson’s response to the criticism that came her way after Silent Spring was published is equally impressive. She calmly and persistently stated her case, using the facts she gathered for the book, and ultimately prevailed—all while she was battling the breast cancer that would kill her within two years of Silent Spring’s release.

“She was eviscerated by industry and powerful corporate lobbies,” Dr. Chivian told me. “They attacked her in every possible way, undermined her arguments, and ridiculed her science. But she was fearless in her beliefs and in her accuracy as a researcher and a writer, and she was totally determined to tell the American public of a grave danger that they faced. Her quiet leadership still serves as a role model for others undergoing such attack.”

Silent Spring was instrumental in banning the use of many dangerous pesticides. It helped spark the modern environmental movement, launch the Environmental Protection Agency, and pass the Clean Water Act and the Endangered Species Acts. It is in the Modern Library’s 100 best nonfiction books, and Discover magazine named it one of the 25 greatest science books of all time.

If you haven’t read Silent Spring, the 50th anniversary is as good a time as any. Rachel Carson’s message that human health and environmental health are inextricably linked continues to resonate today, and still carries the same urgency that it did in 1962.