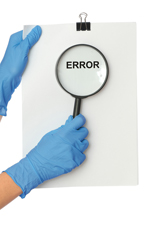 The toll taken by medical mistakes burst into public attention with a 1999 report called To Err Is Human from the U.S. Institute of Medicine. The report estimated that between 44,000 and 98,000 people die each year as a result of preventable medical errors. Such errors can be headline grabbers, like the death of Boston Globe columnist Betsy Lehman from an overdose during chemotherapy. Most, though, are far out of the spotlight. They include missed diagnoses, the use of incorrect or unproven treatments, mistakes in surgery and drug prescribing, and preventable problems such as bedsores, which can lead to infection and death.

The safety of hospital stays and encounters with health-care providers got a boost today with the publication of 22 evidence-based “patient safety strategies.” Although most focus on care that takes place in hospitals, they extend to almost all interactions between individuals and their doctors, nurses, and other care providers. The top 10 strategies include:

•   The use of checklists before, during, and after surgery, in the same way that airline pilots use checklists before taking off—to be sure that every single important thing has been done, and nothing accidentally neglected

•   Institution of meticulous procedures, including the use of checklists, when putting a central line into a patient and caring for the line. (A central line, also called a central venous catheter, is a tube placed into a large vein in the neck, chest, or groin. It is used to deliver medication or fluids and conduct various tests.) Unless these lines are properly placed and maintained, they can become infected.

•   Finding ways to use fewer urinary catheters to help people urinate, because these catheters can cause urinary tract infections

•   Preventing pneumonia and other infections in people on ventilators by elevating the head of the bed, taking breaks from the use of sedating medication, and other strategies

•   Avoiding the use of abbreviations for medications or procedures

•   The use of gloves, gowns, and other so-called barrier precautions to prevent healthcare-associated infections

•   Using ultrasound to guide the placement of central lines

•   More attention to treatment and prevention efforts for people who develop blood clots in a leg, arm, or lung (venous thromboembolism)

The recommendations were published online today in the Annals of Internal Medicine as part of a four-year effort by a national team of patient-safety experts and analysts supported by the federal Agency for Healthcare Quality and Research (AHRQ).

A dozen more safety efforts “encouraged” by the panel include greater attention to fall prevention, asking pharmacists to check for harmful medication interactions, reducing radiation exposure from CT scans and other imaging procedures, and documenting patient preferences for life-sustaining treatment.

To Err Is Human prompted the Agency for Health Care Policy and Research (now the AHRQ) to turn its attention to patient safety. Its 2001 report, Making Health Care Safer, identified some safety practices. Yet the agency concluded that there really wasn’t enough evidence about what worked and what didn’t to make solid, across-the-board recommendations. The new Annals of Internal Medicine report provides an evidence base upon which to build patient safety efforts that will make a difference.

One organization that has championed patient safety is the independent Institute for Healthcare Improvement, founded by Dr. Donald Berwick at Harvard Medical School. It instituted a 5 Million Lives Campaign in 2006. Participating hospitals and health care providers pledged to put into place 12 practices to prevent 5 million incidents of medical harm over a period of two years. Some of those practices are on the list published today.

Other organizations, like the Leapfrog Group, also focus on patient safety. It created an online Hospital Safety Score that you can use to see how your hospital stacks up in terms of safety. It ranks hospitals based on national performance measures from AHQR, the Centers for Medicare and Medicaid Services, and elsewhere.

Very few of the safety practices are expensive, high-tech interventions. Instead, they are almost old-fashioned efforts that aim to improve communication between health-care providers and their patients, and to improve the practice of medicine rather than the art of medicine. The theme of all of these interventions is to create systems that help caregivers follow every step that is known to improve patient care, and to avoid relying on fallible human memory. To err may be human, but it is also often preventable.