Millions of American men and women have served in the Armed Forces, protecting and defending our nation. Although many died, most returned home to “pick up their lives.” That isn’t always easy. For some veterans, the trauma of war changes the brain in ways that can cause long-term problems.

War-related mental health problems have been with us for centuries. They probably afflicted Achilles, the Greek warrior at the center of Homer’s Iliad. During the Civil War, such problems were called “nostalgia” or “soldier’s heart.” In World War I, the term was “shell shock.” “Combat neurosis” and “battle fatigue” were the preferred descriptions during World War II and the Korean War. By the late 1970s, the condition had evolved into post-traumatic stress disorder (PTSD).

According to the American Psychiatric Association, more than 300,000 veterans of the wars in Iraq and Afghanistan have been diagnosed with PTSD. Countless others probably suffer from this condition but have never sought help for it. Even sadder, in 2012 more military deaths were caused by suicide than by combat. You can see other compelling statistics in the infographic below. 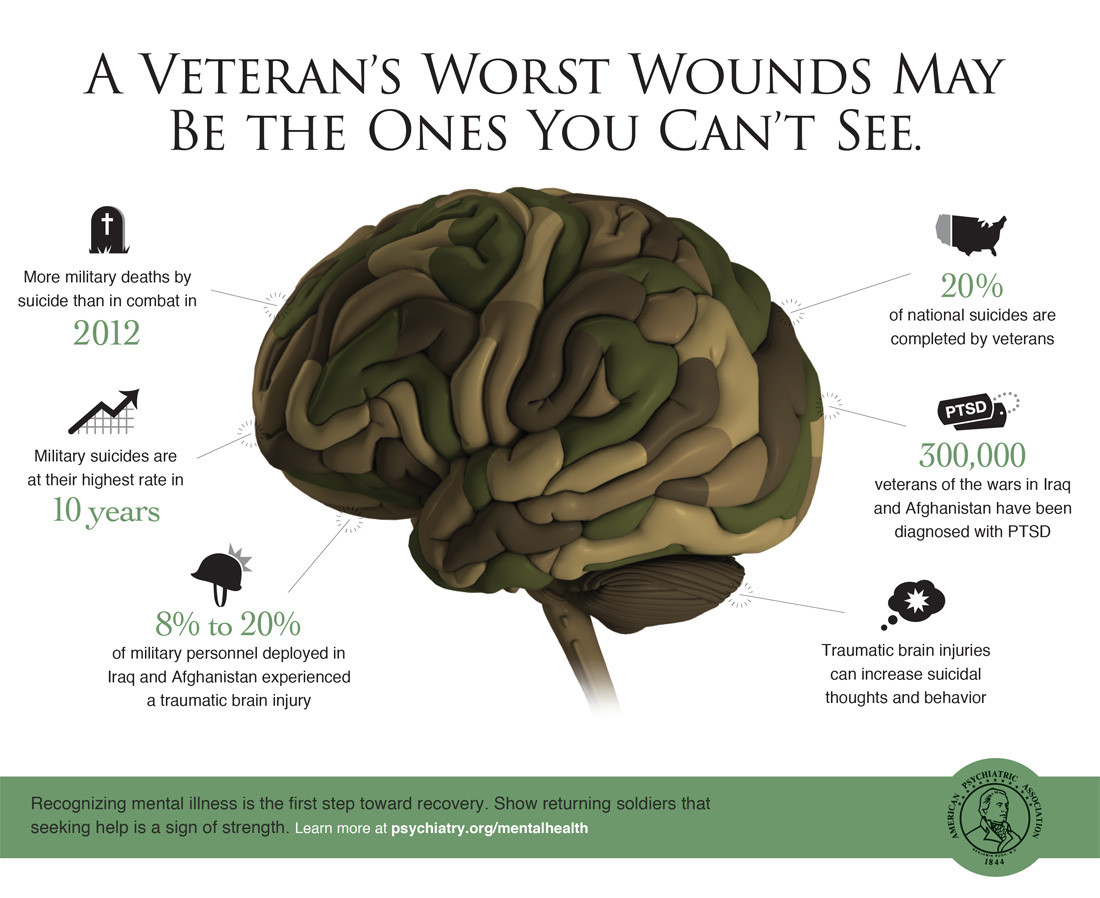 Many veterans don’t seek help because they feel there’s a stigma attached to these invisible wounds. That’s a shame, because help is available. “Seeking help for a mental health issue is a sign of strength, not weakness,” says former U.S. Rep. Patrick Kennedy, in a video encouraging the American family to “embrace our veterans so they stop suffering in silence.”

If you know a veteran, thank him or her for having served our nation. And if you think he or she is having trouble, bolster your courage and ask. Beginning the conversation may open the door to healing.

My dad is a Vietnam veteran and growing up he’d often lash out and yell. I didn’t realize it at the time, being so young, that he had PTSD as well as anxiety. Now that I’m 26.. And I have my own mental health issues to contend with – I wish there was wider acknowledgement of the state of mental health across the globe. My dad inspires me and I even created my own website. 🙂

It’s great read for me.

mental health is most important part of life cause mental is the main part of body which govern the nerve system.

I am undergoing treatment at the moment for depression which was diagnosed 27 years ago, but I feel it is much longer than this. I have e many times been attended to by the emergency team from local hospital. I still feel let down by first line of care eg local GP,. I have a physiologist that seems to take my problems seriously. I now work in aged care where a lot of undiagnosed depression exists. A lot of doctors feel that they are old and don’t matter, so I feel my through my experiences. I can help them, we are put on this earth for a reason, we just have to find the best way to share and care.

I am a USMC vet of Viet Nam. I want to thank Mr.Patrick J. Skerrett for posting this article. It has been more than 40 years since I saw war first hand, however, I still see some of it as though I am still there. The vets returning from our most recent wars are suffering as well. Please accept my (our) deepest appreciation for keeping this very important malady in the fore and on peoples mind.