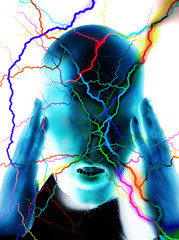 The 35 million Americans with migraine know all too well the signs and symptoms of this debilitating condition. For the rest of you, here’s a good description by horror author Steven King, himself a migraineur, in his novel Firestarter:

“The headache would get worse until it was a smashing weight, sending red pain through his head and neck with every pulse beat. Bright lights would make his eyes water helplessly and send darts of agony into the flesh just behind his eyes. Small noises magnified, ordinary noises insupportable. The headache would worsen until it felt as if his head were being crushed inside an inquisitor’s lovecap…. He would be next to helpless.”

Migraine was once largely unpreventable and untreatable. Today there are dozens of prescription and over-the-counter medications, and even a few herbal preparations, proven to prevent migraine. Unfortunately, only about one-third of people who could benefit from a preventive therapy take one. New guidelines from the American Academy of Neurology and the American Headache Society highlight effective treatments, which should make choosing a medications easier and safer for migraine sufferers. The guidelines were published in today’s issue of the journal Neurology.

Whether to take something every day to prevent migraine is a personal choice. When deciding this with your doctor, consider the following:

A good place to start might be with a daily herbal or over-the-counter product. According to the new guidelines, there’s good evidence that an extract of the butterbur plant is effective at preventing migraine. Other simple preventives include ibuprofen (Motrin, Advil, generic versions), naproxen (Aleve, generic versions), riboflavin (vitamin B2), and an extract of feverfew known as MIG-99.

When it comes to prescription medicines, the guidelines recommended these as being supported by the most solid evidence for preventing migraine

There is no definite first choice for any of the above. Your choice should depend upon whether you have another condition that might also be helped with the same medicine. For example, someone with arthritis and migraines might start with daily naproxen.

Be patient if the first or even second one you and your doctor choose doesn’t help. The guidelines list even more medicines that might be right for you.

Prevention important for many

Several medications are available that can stop a migraine in its tracks, or at least blunt its course. But these don’t work for many migraineurs. For them, prevention is key to avoiding novelist Joan Didion’s compelling description of her migraines in the essay “In Bed”:

“Migraine gives some people mild hallucinations, temporarily blinds others, shows up not only as a headache but as a gastrointestinal disturbance, a painful sensitivity to all sensory stimuli, an abrupt overpowering fatigue, a strokelike aphasia, and a crippling inability to make even the most routine connections. When I am in a migraine aura (for some people the aura lasts fifteen minutes, for others several hours), I will drive through red lights, lose the house keys, spill whatever I am holding, lose the ability to focus my eyes or frame coherent sentences, and generally give the appearance of being on drugs, or drunk. The actual headache, when it comes, brings with it chills, sweating, nausea, a debility that seems to stretch the very limits of endurance. That no one dies of migraine seems, to someone deep into an attack, an ambiguous blessing.”

The World Health Organization ranks migraine as 19th in the causes of years lived with disability . . . for patients who who do not find relief or cannot tolerate standard treatments, it is believed that electrical stimulation to the occipital nerves (under the scalp, at the back of the head) stimulates release of natural pain-relief chemicals. Occipital nerve stimulation to relieve migraines is approved in Europe and Canada, and has been subject to study in the U.S. as well: http://www.neuromodulation.com/migraine. As About.com notes, “Neurostimulation already has won wide medical acceptance for the management of symptoms of advanced Parkinson’s disease along with such pain conditions as chronic back and leg pain and Complex Regional Pain Syndrome (CRPS).”

Hello writers, I hope you do not just write about migrant disease only, but if possible you should include the causation of disease. thank you

My “laymans” opinion is as follows– I believe most severe headache conditions have a or are the results of a root cause situation in the body that may be fostered by heavy metal exposure and contamination, particularly lead and mercury, and also internal digestive disorders that prevent regular and full bodily waste elimination. Also allergies may be a contributing factor. I speak only by personal experience,and having identified such contamination and gone thru a full heavy metal and internal parasite detox and elimination program that had amazing results— NO MORE HEADACHES!

great post… I think the pills seem work but we also have to get it early.

I have always struggled with migranes nothing seems to help. The Pills seem to work but only if i get it early.

For me it depend but most of the time when I have some migrames the pills help me a lot !
I can’t leave without them