Many drivers asleep at the wheel 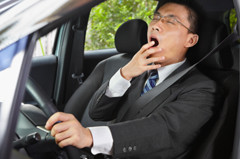 If you’ve ever nodded off while driving, you aren’t alone. In a new report from the Centers for Disease Control and Prevention, 4.2% of Americans admitted to falling asleep while driving at least once in the previous month.

The just-published survey, conducted in 19 states and the District of Columbia, found the sleepiest drivers in Texas (6.1%) and Hawaii (5.7%), and the most alert ones in Oregon (2.5%) and the District of Columbia (2.6%). Individuals most likely to have fallen asleep while driving were those who said they unintentionally fell asleep during the daytime at least once during the preceding month, those who said they snore at night, and those who reported sleeping less than six hours a night.

These numbers are in line with earlier studies. In a National Highway Traffic Safety Administration survey, 4.2% of participants said they had fallen asleep in the previous month while driving; 11% said it had happened at least once in the previous year.

Keep in mind that these numbers reflect only the percentage of people who were aware they had fallen asleep. They don’t include those who fell asleep while driving without recognizing that had happened. To see how this happens, check out the report from ABC’s Ron Claiborne, who drove drowsy on a closed track while cameras recorded his “microsleeps.”

Drowsy driving is a substantial safety hazard. Some estimates suggest that it accounts for up to one-third of fatal highway crashes. If you are on the highway, a two-second sleep will carry you 176 feet, the length of two-plus container trucks.

Warning signs of drowsy driving include frequent yawning or blinking, drifting across lanes, missing an exit, or not remembering the last mile or so. Opening the window and turning up the radio don’t help. The only thing to do, says the CDC, is to get off the road and rest until you stop feeling drowsy. If you snore or have trouble sleeping, taking care of these issues may keep you more alert when driving.

The other take-home message from the study is that, with so many drowsy (and distracted) drivers out there, it’s more important than ever to stay alert 100% of the time when you are behind the wheel.