In case of zombie apocalypse, check with the CDC 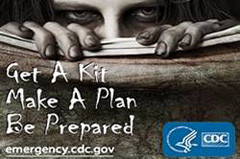 Do you know how to protect yourself and your family during a zombie attack? If not, the federal Centers for Disease Control and Prevention (CDC) can help. In addition to information on how to prepare for emergencies from anthrax to wildfires, the CDC Web site has added a page on dealing with a zombie apocalypse. “That’s right, I said, z-o-m-b-i-e a-p-o-c-a-l-y-p-s-e,” wrote Dr. Ali S. Khan, the Director of the CDC’s Public Health Preparedness and Response division.

I thought the posting was in response to the buzz about the Judgment Day/End of the World that an evangelical radio broadcaster has predicted for tomorrow, May 21. But Dave Daigle, the Associate Director for Communications at the preparedness and response division explained it had less to do with the Rapture and more to do with Twitter and getting out the message about preparing for real emergencies.

The posting has been so popular—more than 30,000 hits in three days—that it crashed the CDC’s servers. “It has been insane,” he said.

Despite the popularity of the zombie post, Daigle and Dr. Kahn don’t have plans for any other similar posts in the near future. What they really hope is that the publicity stunt will turn on a new generation—the 14 to 28 year olds who live on Twitter, as Daigle described them—to preparing for the emergencies that could actually strike their neighborhoods. “Once the dust settles, we want to do some surveys to see if this affected behavior. Did more people become prepared because of it?” Daigle said.

I hope so, both for the good of public health everywhere and for the possibility of more entertaining blog posts from the CDC. As a friend pointed out to me on Facebook, there’s something wonderfully ironic about seeing the words “Your online source for credible health information” above an article that says, “If zombies did start roaming the streets, CDC would conduct an investigation much like any other disease outbreak.”