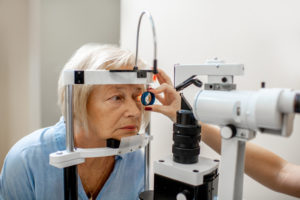 Glaucoma is the leading cause of permanent blindness worldwide, and the second leading cause of permanent blindness in the United States. An estimated three million people in the United States have glaucoma, a number that is expected to increase to 6.3 million in the next 30 years. Although glaucoma is more common in adults older than 60, it can develop at any age. While there is currently no cure for glaucoma, vision loss can be slowed or stopped if the disease is diagnosed and treated early.

Glaucoma is a group of disorders that damage the optic nerve of the eye, which carries visual signals from the retina to the brain, allowing us to see. In glaucoma, the optic nerve is slowly damaged, leading to gradual loss of vision and permanent blindness. Because the damage occurs slowly, it is often without symptoms and goes unnoticed until it is too late. As it progresses, glaucoma can lead to poor quality of life, increased risk of falls, decreased mobility, and difficulty with driving.

Glaucoma is often associated with increased pressure inside the eye. Healthy eyes produce fluid known as the aqueous, which flows through and exits the eye. In glaucoma, this process does not work properly, resulting in increased eye pressure and damage to the optic nerve. The two main types of glaucoma — open-angle glaucoma and angle-closure glaucoma — are determined by the structure of the drainage pathway in the front of the eye (known as the angle), through which aqueous fluid flows.

In open-angle glaucoma, the angle appears open, but a number of factors — including drainage problems — result in poor pressure regulation. This form of glaucoma can occur at both high and normal eye pressures (normal-tension glaucoma). Both subtypes can lead to vision loss and damage to the optic nerve.

In angle-closure glaucoma the angle is narrow, and the resulting structural problems can lead to an abrupt closure of the drainage pathway, leading to a sudden increase in eye pressure. This condition is known as acute angle closure. Although relatively rare, acute angle-closure glaucoma is an ophthalmological emergency, and requires immediate treatment with medication, laser, or surgery, as it can lead to rapid and irreversible blindness. Angle-closure glaucoma also exists in a chronic form where the increase in eye pressure occurs more slowly, often without symptoms, but still requires evaluation and treatment.

Who is at risk for developing glaucoma?

Glaucoma is a complex disease, and while many associated genes have been identified, the underlying causes are still unclear.

However, a number of important risk factors have been identified, which include

What are the symptoms of glaucoma?

Most people with glaucoma, particularly those with open-angle glaucoma or normal-tension glaucoma, may have no or very minimal symptoms for years. It is probably not surprising that an estimated 50% of glaucoma cases are undiagnosed, emphasizing the need for regular eye examinations, beginning at age 40. An eye care professional will be able to detect signs of glaucoma before you can, and timely intervention is key to preventing disease progression and vision loss.

Early signs of glaucoma include difficulty with low contrast, and some loss of peripheral vision. In more advanced stages, patients develop loss of their visual field, or blind spots, that ultimately progress to central vision loss.

Acute angle-closure glaucoma causes symptoms of pain, blurred vision, and nausea, and is a medical emergency.

What treatment options are available?

Although there is currently no cure for glaucoma, prompt treatment can help slow or stop the progression of vision loss. Depending on many factors, including your age and the type and severity of your glaucoma, treatment may include medications and/or surgery directed at lowering eye pressure.

The future of glaucoma care

Research in glaucoma continues to improve our understanding of the causes of disease and develop more targeted and personalized treatments. There are subtypes of glaucoma, beyond the main categories described here, that many believe will benefit from different treatments. In the future, genetic testing may play a role in estimating individual risk for developing glaucoma over time. Additionally, treatments to stop loss of nerve cells (of the retina and optic nerve), called neuroprotection, show promise. Researchers are studying new drugs, drug delivery systems, and innovations to make surgery more safe and effective.

If you are worried about glaucoma, and especially if you have a family history, the best approach is to visit your eye doctor regularly. Every adult should have a baseline eye exam at age 40, even if your vision is normal. Vision loss from glaucoma can be minimized with treatment, so early detection is key.