From the wrist to the heart: new angioplasty method is safe, effective

Clearing a clogged or blocked heart artery once required open-heart surgery, followed by a weeks-long recovery period. Angioplasty, first done in 1977, offers a simpler alternative that doesn’t require surgery or much recovery. Results from a large international trial provide strong evidence for an even easier type of angioplasty that is done through the radial artery in the wrist instead of the femoral artery in the groin. 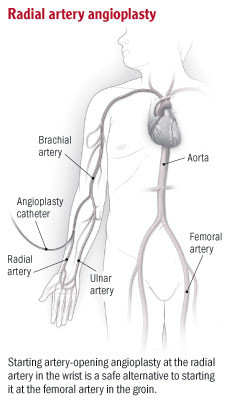 The radial artery supplies the hand with blood. It’s the artery you press when you take your pulse. Performing angioplasty through the radial artery was first introduced in the Netherlands in the early 1990s. This artery offers ready access to the heart and is sometimes easier to get at. Doing angioplasty through it also tends to cause less bleeding around the puncture after the procedure is over than the femoral approach.

Radial artery angioplasty has become popular in Europe and Japan, where it is used almost as often as the femoral approach. Cardiologists in the United States have been reluctant to embrace it.

An international study called RIVAL compared the two approaches and found they were equally successful at opening the troubled heart artery (95%). Rates of death, heart attack, and stroke within 30 days of the procedure were identical (3.2%). But there were fewer cases of bleeding around the angioplasty entry site with the radial approach, and it also appeared to be more effective than the femoral approach for treating people in the midst of a heart attack. The results were presented yesterday at the American College of Cardiology meeting in New Orleans and published in The Lancet.

One big plus of the radial approach is that a person doesn’t need to lie still for several hours after the procedure to make sure the bleeding has stopped. In fact, people who have radial artery angioplasty can often go home the same day, as we write in the April 2011 Harvard Heart Letter.