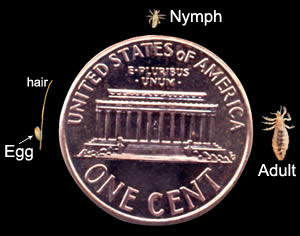 Good news for parents, teachers, pediatricians, and others engaged in the ongoing battle against lice: the FDA just approved a new treatment for head lice in children age four and older. Called Natroba, it’s a liquid that is rubbed into the hair and allowed to sit for 10 minutes before being rinsed off. Natroba is a useful addition to the anti-lice arsenal, since some head lice have become resistant to permethrin and pyrethrins, the active ingredients in over-the-counter anti-lice products such as Nix and Rid.

Head lice are tiny insects that go by the big name Pediculus humanus capitis. They thrive in the warm tangle of human hair, feeding off blood in the scalp and breeding with abandon. A female lays eggs called nits that she attaches to strands of hair. Nits hatch after about eight days, become adults in another week or so, feed for awhile, then begin to make more lice.

First off, here’s what not to do: don’t shave your or your child’s head, or coat it with petroleum jelly or mayonnaise or anything else designed to “suffocate” the parasite. You’ll probably end up with greasy, smelly, lice-infested hair.

Current guidelines from the American Academy of Pediatrics call for the use of an over-the-counter product containing permethrin or pyrethrins as a first salvo against head lice. Shampoos and rinses made with these substances are generally effective. Most treatments for head lice need to be used twice, seven to 10 days apart, along with combing wet hair with a fine-toothed nit comb. Some lice are resistant to pyrethrin and permethrin. Stronger prescription drugs, such as malathion and lindane, also work but aren’t as safe for humans. That’s where Natroba comes in.

The active ingredient in Natroba is spinosad, a chemical derived from a naturally occurring bacterium collected in the soil around an abandoned rum distillery in the Caribbean by a vacationing scientist. It has proven to be an effective pesticide that has little effect on humans. The most common side effect in the trials was redness or irritation of the skin or eyes.

Natroba, which will be sold as a prescription medication, is applied to the head for 10 minutes, then washed out. It does not require combing as part of the treatment, which will make many parents–and their kids–exceedingly happy. In two clinical trials conducted among 552 children with head lice, 86% were lice-free after one or two treatments with Natroba, compared to 44% with a 1% permethrin treatment. The product will be available later this year.

If you are worried about chemicals, don’t ignore the value of a nit comb. A study published in the British Medical Journal in 2005 showed that combing out the hair with a fine-toothed comb (the “Bug Buster”) immediately after using conditioner worked better than a single treatment of an over-the-counter insecticide.

Although Natroba looks like an interesting and effective new product, I wouldn’t be the first on my block to try it if my children or I had lice. It’s the same caution I give readers of the Harvard Heart Letter when it comes to newly approved drugs and devices. The clinical trials that led to the approval of Natroba included fewer than 600 children who used it once or twice. We will undoubtedly learn more about the drug—its effectiveness, side effects, safety, and interactions with other drugs—after it has been used by hundreds of thousands of people. With other effective treatments out there, a wait-and-see approach makes sense.

To learn more about head lice and what to do about them, the Centers for Disease Control and Prevention has excellent information online.