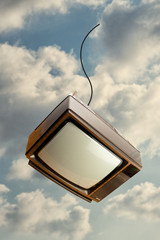 Television can be hazardous to a child’s health. Not just from the inactivity and mental mush that come with watching too much TV, but from the set itself. More than 17,000 American youths end up in emergency departments each year with injuries from a falling television set. Two-thirds of them are under age 5, according to a report published online today in the journal Pediatrics.

Dr. Gary A. Smith and colleagues looked at injury data from 1996 to 2011. Over that period, nearly 400,000 children under 18 years old were treated in emergency departments for TV-related injuries. In 1996, most of the injuries occurred when kids ran into television sets. By 2011, injuries from falling TVs dominated.

Curiously, the rate of televisions falling from TV stands and entertainment centers was stable over the years, while the rate of TVs falling from dressers, bureaus, chests of drawers, and armoires nearly quadrupled.

What might be contributing to the increase? The researchers speculate that as Americans buy more TVs, some are relegated to less-safe locations, like bedroom dressers. The shift from older, bottom-heavy cathode ray tube televisions to lighter, less bulky flat-screen sets may also contribute to tippier TVs.

Voluntary standards for some types of furniture, like chests, dressers, and bookcases, require that straps, anchors, or other anti-tip devices be provided. Television sets aren’t covered by the standards. “Extending this type of requirement to TVs as part of the Underwriters Laboratories standard that addresses TV stability would be an important step in decreasing the number of injuries resulting from falling TVs,” the authors write.

If you have children at home or grandchildren who visit, keeping TV sets off of furniture with drawers that can be opened—which children sometimes use as steps to reach the set—is one way to avoid injury. Bolting or strapping TVs to the surface is another.

Check out other steps for making a home safer at the Harvard Health Publishing/InteliHealth “Childproofing your home” tool.

Good TV placement course avoid accidents. Of writing on the new I know there are many people who hurt caused sentenced tv. This may be an important reminder to us all to put the tv kind of stuff in a safe place.
thank you for sharing

wow! Didn’t know about this until I came across this post.thanks for sharing

A very good and interesting post that i have come across, thanks for sharing the post.
Really appreciable.

As this trends continues, you will see TV stabilization becoming an ever increasing part of baby proofing a home. The lighter a TV becomes the easier it is to place on a dresser in a bedroom, and the more likelihood it could fall an inure a child who might be sitting on the floor watching that TV. Every new parent should be aware of this.

is this for real? how many tvs get thrown out of a window? this can’t really happen this often. i feel like i’m on a game of fact or myth. haha.

I am sad on heard about this incident. This couldn’t happen if their parent take a look on their children.As a parent, we should take a look on ours children. The tv should place in the safe place. I mean, far from the children reach.