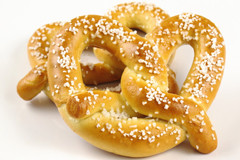 Many of Americans’ favorite foods are key sources of the too-much sodium we take in each day. A new report from the Centers for Disease Control and Prevention (CDC) shows breads and rolls, cold cuts, pizza, and poultry topping the list. Just 10 types of food deliver almost half of our daily sodium.

Two other interesting findings from the report:

The CDC gathered this information from What We Eat in America, a survey of 9,000 men, women, and children. No matter how the investigators looked at the data—by age, sex, or racial-ethnic group—the same culprits kept showing up in the top 10. There were two exceptions. Hot dogs and sausages came in number 3 among children ages 2 to 5, and number 5 among non-Hispanic blacks. Burritos, tacos, and tamales were the number 1 contributor of daily sodium among Mexican-Americans, and tortillas were number 5.

Almost all of the sodium Americans take in comes from salt. The body needs some sodium to balance fluids, transmit nerve impulses, contract and relax muscles, and regulate the flow of other substances into and out of cells. Too much sodium can increase blood pressure and make the kidneys work harder. High blood pressure is a leading cause of stroke, heart attack, heart failure, kidney disease, and more.

A report by the U.S. Institute of Medicine estimates that reducing Americans’ average sodium intake by 400 milligrams could prevent 28,000 deaths a year and save $7 billion a year in health care costs.

The CDC study reinforces the idea that most of the salt in our diet is hidden—added by food companies and chefs far from our view. Only about 5% of sodium is added as salt during food preparation at home, and maybe another 5% comes from salt sprinkled at the table.

The American Heart Association and others recommend getting no more than 2,300 milligrams of salt a day, and less (1,500 milligrams) for non-Hispanic blacks, everyone over age 50, and anyone with high blood pressure, diabetes, or kidney disease. Getting food companies and chefs to cut back on the amount of salt they add to prepared foods will help. Some companies are already doing this.

It also takes consumer savvy, like reading labels and asking servers about salt in food.

Do you watch your sodium intake? Do you know where most of your sodium/salt comes from?

Thank you for your kind rpeosnse. Our goal is to inform with the latest in diabetes care. Please visit our blog for regular updates. Have a nice day!

This article reinforces the fact that eating raw unprocessed foods is the way to go if optimal health is what you are striving for.

I didn’t think I had to worry about sodium because I don’t have high blood pressure, but it looks like I was wrong

I truly believe that peoples diets are the number one reason for the health problem in this and other countries. Companies simply do not care how their products effect us in the long run. People need to learn how to eat healthy again. There’s a great diet plan you can read about on this site home remedies for thrush. I love it, and stick to it religiously.

Yes most of the brands do give out samples of their products. Look for “Get Official Samples” online and get the samples. They are the best. You wont need CC.