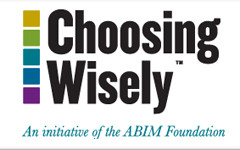 In a proactive effort to help stem healthcare spending, nine medical specialty organizations have published their top 5 lists of tests, treatments, or services that are unnecessary or at least should include a thorough conversation between patients and their doctors regarding the benefits and risks of before undertaking the procedure.

The lists are part of a campaign called Choosing Wisely, organized by the American Board of Internal Medicine Foundation. The medical societies, for example, advise against immediately prescribing antibiotics for sinusitis, ordering an MRI during the initial evaluation of back pain, and doing an exercise stress test for people who don’t have any signs or symptoms of heart disease. (See the top two “dont’s” from each specialty below, or visit choosingwisely.org to see all 45.) Eight more medical specialty organizations are planning to join the campaign.

The purpose of making these lists, says the foundation, is to help doctors and their patients talk about tests and procedures in order to choose the ones that:

In a recent article in the Journal of the American Medical Association, former Medicare administrator Dr. Donald Berwick and a colleague argue that as much as $900 billion dollars of health care spending is wasted each year. A big chunk of this comes from doctors ordering tests that yield little useful information or performing procedures that don’t make their patients better. This happens for several reasons. Some doctors just don’t know which procedures or tests are useful and which ones aren’t. Some order useless tests because their patients expect or ask for them. Others do it to protect themselves from possible lawsuits.

Take the exercise stress test as an example. It involves walking on a treadmill while monitors record the heart rate, heart rhythm, and blood pressure. It’s a useful test for people who have symptoms that might indicate heart disease, like chest pain when they are active or under stress. But as with many tests, it isn’t useful just to “check under the hood” in people who feel fine.

About 15% of the time, an exercise stress test suggests that there may be a heart problem, when in fact there isn’t. These “false-positives” can lead to needless worry and further testing, often including an invasive angiogram. To perform that test, a doctor must insert a thin wire and plastic tube called a catheter into a blood vessel in the groin and maneuver it into the heart. Angiogram-related complications aren’t rare.

And if the test shows a narrowing in an artery, many doctors and their patients are prone to fixing it with angioplasty and placement of a stent—which also can have complications and long-lasting repercussions—even though doing this won’t make the person feel better, protect him or her from having a heart attack, or live longer.

Avoiding tests and procedures that aren’t effective or useful saves time and money, and protects the recipients from harm. For the Choosing Wisely campaign to be a success, all of us—doctors and their patients alike—must stop believing that if some medical care is good, more is better.