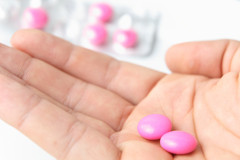 Most people don’t think twice about taking Motrin, Advil, Aleve or similar over-the-counter painkillers. Some should. A new study suggests that heart attack survivors should use these drugs as little as possible.

These medications belong to a family of drugs known as nonsteroidal anti-inflammatory drugs (NSAIDs). They are considered pretty safe when used occasionally in low to moderate doses to relieve pain, with some exceptions. People with kidney disease and those with a history of peptic ulcer or upper gastrointestinal bleeding should avoid using NSAIDs. People with heart failure, advanced liver disease or high blood pressure should check with their doctors before taking NSAIDs. The new study, published online in the journal Circulation, suggests adding heart attack survivors to the list.

A team of Danish researchers followed the health of almost 100,000 people who had a first heart attack for five years. During this time, almost half of them were prescribed an NSAID at least once.

People who took any NSAID other than aspirin also had a higher risk of having a second heart attack.

Of all the NSAIDs, diclofenac (Cataflam, Voltaren, generic) was linked to the largest increases in death or heart attack rates, while naproxen (Naprosyn, Aleve, generic) appeared to carry the lowest risk. The lower risk with naproxen confirms what has been seen in older studies.

No study so far—including this one—has been able to answer exactly why NSAIDs cause problems for heart attack survivors and other people with compromised cardiovascular function. One theory is that people who take an NSAID stop taking aspirin, a drug with proven benefits in this group. Except for people with aspirin allergies, all heart attack survivors and others with cardiovascular disease should take low-dose aspirin.

Another possible reason is that NSAIDs can block aspirin’s protective effects. Aspirin makes platelets less sticky and less likely to clump and form blood clots. Such clots in narrowed arteries are the major cause of heart attacks.

What Changes Can I Make Now?

If you have heart disease and need pain relief, try acetaminophen first. That’s what I tell my patients, and is what the American Heart Association recommends. Generic versions are available and work just as well as brand-name Tylenol. Keep the maximum dose to 3,250 milligrams per day. Doses higher than this increase the risk of liver damage.

If you do need an NSAID after a heart attack, it’s best to check with your doctor first. He or she will likely be okay with you using an occasional NSAID for a headache or for other pain that is likely to last for a short time.

Of the NSAIDs, naproxen is probably the best choice for your heart. But whatever you and your doctor decide is best for you, use the lowest dose possible for the shortest period of time.

If you do need to take an NSAID long term, say for arthritis, take your aspirin first each day. Wait an hour or so before taking the NSAID. This is especially true for ibuprofen. Doing this gives aspirin enough time to exert its anti-platelet effect and lessens the chance that an NSAID will block it.

We should not take tablets for small causes/pains, taking tablets for all weakens the immune system and increases the side effects. If it is really emergency then we can take in a smaller dose, but not for small things.

People consume pain killers often for quick relief, its OK to have it once in a while, but if pain becomes intolerable, an expert should be consulted and it cannot be avoided. I prefer Natural Pain Therapies like Active Isolated Stretching, and it has relief therapy for almost all type of pains.

Really good details. Will share with my job colleagues as well..This would help them to stop taking overdose of painkillers.

interesting post can i add this on my blog? thanks in advance