CDC panel says boys should get HPV vaccine, too 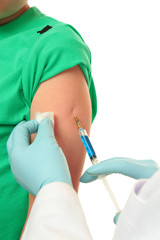 Five years ago, the Centers for Disease Control and Prevention (CDC) recommended that all girls and young women be vaccinated against the human papillomavirus (HPV), a sexually transmitted virus that is a key cause of cervical cancer. Members of a CDC advisory panel have now voted unanimously that boys and young men should also get the vaccine.

Why? Males can’t get cervical cancer. But they do contribute to it by spreading HPV to women through sexual activity. So vaccinating boys and young men against the virus will help prevent its transmission to women. Vaccination will also help prevent some of the 7,000 HPV-related cancers that occur in men each year, said Dr. Anne Schuchat, director of the CDC’s National Center for Immunization and Respiratory Diseases, during a press briefing. These include cancers of the penis, anus, head, neck, and throat. HPV also causes genital warts in both men and women. (You can read a transcript of the entire briefing or listen to it here.)

About 20 million Americans have HPV; the vast majority don’t know it. In most people infected with HPV, the immune system wards off the virus and it never causes any problems. But anyone with HPV can spread it by skin-to-skin contact during sexual activity. Since there is no clinical test available to diagnose the infection, immunization is currently our best shot at protecting against HPV-related disease.

Vaccination entails  three shots spread over a six-month period. Total cost: $300 to $400. The vaccine works best when a child gets it before he or she becomes sexually active. That’s why the CDC recommends giving it to girls and boys before age 13. It can be given as late as age 26 in women and age 21 in men, but isn’t nearly as effective. Keep in mind that the vaccine isn’t a magic bullet—it covers the four main types of disease-causing HPV, but there are other strains that can also cause disease.

So far, only about one-third of girls eligible for vaccination against HPV have gotten all three shots. “Many parents of pre-teens don’t okay the vaccine because they aren’t ready to think about their child someday having sex,” says Dr. Henry Bernstein, professor of pediatrics at Hofstra North Shore-LIJ School of Medicine and a medical advisor to Harvard Health Publishing.

Making the HPV vaccine part of the routine series of vaccines for all youths may help remove some of the negative implications associated with getting it. It can also increase “herd immunity”—the more people who are vaccinated against a virus, the less that virus can circulate in the community. (You can see how herd immunity works at health.harvard.edu/herd-immunity.)

It is remarkable to be able to prevent cancer with an antiviral vaccine. Yet immunizing a daughter or son against a sexually transmitted virus she or he might pick up later in life is uncharted territory. What will you decide for your young’un?

Can any one recommend a good dailies guide?

Please be aware of Hashmi Dawakhana’s sexual products. They are cheating to innocent people like me. I was also attracted and impressed by their advertisements and lucrative websites. I also got trapped by these thugs. Whatever they are promising on net like – time period, erectile dysfunction and premature ejaculation, hardness, quantity of sperms and semen .These are all fakes.

I took full course of Mugle- e -Azam my treatment. I have only cured with hardness & erectile dysfunction. I was expecting to be fully cured of my pre ejaculation problem but I got little improvement.

Please think over before making any decision.

why dont we have these things easily accesible on google

Gee, I wonder why there are no comments on here …