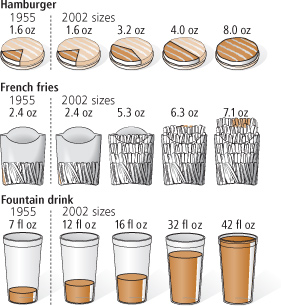 When I was growing up, my parents had a simple rule when it came to food: “Finish everything on your plate.” We had to sit at the table until we did.

They meant well. They wanted us to understand that food should not go to waste. The problem with this advice—and I’m sure I’m not the only American who grew up with it—is that we learned early on to eat everything put in front of us when we sat down to meals. Then the size of the plates grew—and so did the amount of food we consumed.

It’s called portion inflation. Take a look at the illustration at left. It’s based on an analysis published in the Journal of the American Dietetic Association which found that typical restaurant portion sizes today are two to eight times as large as those in 1955. Back then, people who consumed a typical American meal (a hamburger, French fries, and a soda) had only one portion size to pick from. Today we can choose from multiple portion sizes: reasonable, big, bigger, and ridiculous (as I’ve come to think of the sizes listed in that last column).

Portion size matters. The bigger the portion, the more calories you can consume. Here’s an example, using a table of calorie information available online in the nutrition section at McDonald’s. By choosing the largest size in each category, you’ll end up consuming nearly triple the number of calories in a meal as you would if you chose the smallest portions.

Partly as a result of portion inflation, we’re eating more. Dietary surveys indicate that, on a per capita basis, Americans consumed 200 calories more per day in the 1990s than they did in the 1970s. That may not sound like a lot, but over time extra calories translate into extra pounds. Some experts calculate that people who add 150 calories a day to their diets, without increasing physical activity to burn those calories off, will gain as many as 15 pounds in a year.
I was thinking about all this recently when I read through the new U.S. Dietary Guidelines. The new guidelines include a key message for the two-thirds of Americans who are overweight or obese: Consume fewer calories. Or, as The New York Times recently headlined its own article: “Government’s Dietary Advice: Eat less.”

Easy to say, harder to do—as anyone who has ever tried to diet will attest. To me, the government’s advice to just “eat less” sounds a lot like the 1980s slogan, “Just Say No” to drug abuse. The implication is that people can overcome both excess weight and drug addiction through willpower alone. Yet appetite, like addiction, reflects a learning process that becomes ingrained over time and is associated in the brain with certain external cues. That’s why the sight of a full plate of food will prompt us to begin eating and the sight of a clean plate will help us know when to stop. The more we see, the more we eat.

One weight loss technique, which I’ve already blogged about, is to eat more slowly so that the chemical messages that convey “I’m full” have a chance to travel from your gut to your brain.

You can also change some of the external cues that your brain relies on to determine whether you are full. In the process, you may be able to eat less. Here are a few techniques specifically designed to counter portion inflation and trick your brain into thinking “the plate’s clean so I must be full.”

Check out calorie counts before you go to a restaurant by visiting the nutrition information posted on sites such as McDonald’s or Pizza Hut. You can also visit sites like CalorieKing, which lists thousands of foods sold in multiple locations.