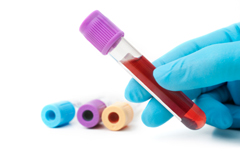 Whenever we hear about a breakthrough in breast cancer—a disease that might have taken the life of a mother, sister, or favorite aunt—it’s natural to feel a great sense of hope.

One in eight women will be diagnosed with breast cancer, and many more will be affected by it through a friend or loved one. My mother had breast cancer. Fortunately, she was cured. With my lineage, I know there’s a good chance the disease is in my future, too.

So when I heard that researchers at Kansas State University have developed a blood test that can rapidly detect breast cancer (as well as non-small cell lung cancer) in its earliest stages, I was intrigued. With breast cancer—as well as most other cancers—early detection is essential. The sooner the disease is found, the better the chance treatment will be successful.

How the test works

According to cancer researchers Stefan Bossmann and Deryl Troyer, their experimental test can identify cancer before symptoms appear by detecting unique enzyme patterns given off by cancer cells. The test exposes a tiny amount of a person’s blood to iron nanoparticles coated with amino acids and a dye. The particles interact with cancer enzymes to form signature patterns, which doctors can detect.

“We can see cancers that do not show up with current imaging technology, and that are too small to be seen by other methods,” says Dr. Bossmann, who is a professor of chemistry at Kansas State University. Cancers from different types of cells (breast vs. lung, for example) give off slightly different enzyme signatures.

The researchers say their test can detect very early breast cancers (stages 0 and 1), as well as early lung cancers (stages 1 and 2), within an hour, with 95% accuracy. They discovered this after testing their method on 32 participants with various stages of breast or lung cancer, as well as on a 12-person control group without cancer.

“These findings are very exciting, but extremely preliminary,” says Dr. Judy Garber, director of the Center for Cancer Genetics and Prevention at the Dana Farber Cancer Institute, and professor of medicine at Harvard Medical School. The study was very small, it hasn’t yet been published, and it still leaves several unanswered questions.

For example, what happens if the test does identify a very tiny, very early cancer? Will a follow-up CT or MRI scan be able to detect it to pinpoint its location? If not, will doctors still need to wait until the cancer grows before they can remove it? Also, will the test lead to real increases in survival, or will patients who test positive be subjected to unnecessary tests and treatments for an early-stage cancer that might never have spread? (This is currently part of a big debate about the prostate-specific antigen blood test for prostate cancer.)

A British team is about to launch a large study to find a different type of blood test for early breast cancer. By taking blood samples from thousands of women attending breast cancer screening clinics, they hope to find genetic markers in DNA that signal an increased risk for the disease.

“The bottom line is that screening for early cancer in healthy people must be done with great care, and tests must show not only that they can detect cancer early, but also that it makes a difference when they do,” Dr. Garber says.

“This is an interesting application of nanotechnology on a difficult problem,” she adds. “It is very early in its development, and will need to be validated in large population-based screening studies.”

Dr. Bossmann agrees that his research is still in its preliminary stages. “It was very encouraging, but this is maybe the fifth step on a long, long way,” he says. Next, he and his colleagues plan to study the test in people with pancreatic cancer. They’re also launching a study using blood samples from more than 200 women with breast cancer, in collaboration with the University of Kansas. He says it could be five years before the test comes into practical use—and that’s only if it proves effective in large-scale studies.

As much as we long for a test that will spot breast cancer early enough to save our mothers, sisters, or even ourselves, we need to remember that there are no overnight successes in medicine. There is only meticulously conducted research, tested and retested in large groups of people until a positive result is achieved.

A rapid and accurate test for early-stage breast cancer may very well be perfected someday. Until then, the best thing women can do is to follow established screening guidelines, which for now means talking to their doctor about their risks, and getting regular mammograms.