The walnut-sized prostate gland produces a thick, milky-white fluid that becomes part of the semen, the liquid ejaculated during sexual activity. It is located in front of the rectum and just below the bladder (see illustration below). It also wraps around the upper part of the urethra, the tube that carries urine from the bladder out of the body. Counterintuitively, the top of the prostate is called the base and the bottom is called the apex.

In general, doctors divide the prostate into three zones (see image below): the peripheral (1), central (2), and transition (3) zones. Most prostate cancers arise in the peripheral zone, the outer area of the prostate, which is next to the rectum. Doctors can sometimes feel a prostate tumor through the rectal wall during a digital rectal examination. Semen stored in the seminal vesicles passes through the central zone and into the urethra for ejaculation. The transition zone is the innermost section of the prostate. Prostate tissue in this area wraps around the urethra.

Because the prostate is located so close to urinary and sexual organs, prostate problems can affect urination and sexual function. For example, when men reach their 40s, the prostate often begins to enlarge. Over time, it can press on the urethra and slow or even prevent the flow of urine, in much the same way that bending a running garden hose halts the flow of water. This condition is called benign prostatic hyperplasia, or BPH (see image below).

To function properly, the prostate requires adequate amounts of certain hormones, including testosterone, produced by the testicles, as well as others produced by the pituitary and adrenal glands. 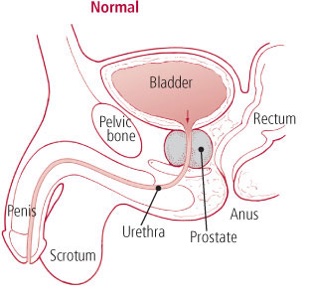 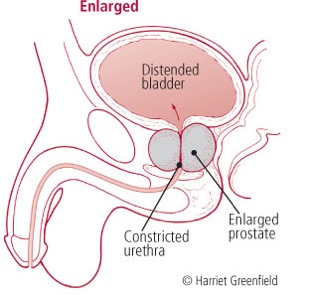