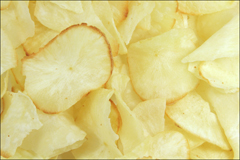 Without meaning to, you’ve gained a few pounds over the last few years. How did that happen? Certain foods, especially the humble potato, may be partly to blame.

In a fascinating study of 120,000 healthy, non-obese women and men taking part in long-term studies of diet and health, the participants gained an average of 3.3 pounds every four years over a 13-year period. When the researchers tallied up the foods that contributed most to this weight gain, potatoes topped the list—twice:

Other contributors to weight gain included sleeping less than six hours a night or more than eight hours, drinking alcohol, and watching television. The results were just published in The New England Journal of Medicine.

The study offered some good news and tips for losing weight, too. Foods and lifestyle choices associated with losing weight included

Walter C. Willett, who chairs the Department of Nutrition at the Harvard School of Public Health, has been warning us about potatoes for years. Here’s what he says in his book, Eat, Drink, and Be Healthy: The Harvard Medical School Guide to Healthy Eating. (Full disclosure: I co-authored this book.) “Nutritionists and diet books alike often call potatoes a “perfect food.” But while eating potatoes on a daily basis may be fine for lean people who exercise a lot or who do regular manual labor, for everyone else potatoes should be an occasional food consumed in modest amounts, not a daily vegetable. The venerable baked potato increases levels of blood sugar and insulin more quickly and to higher levels than an equal amount of calories from pure table sugar.” French fries do the same thing, but with an added blast of fat.

In the Healthy Eating Pyramid that Willett and his colleagues devised, they plucked potatoes from the fruits and vegetables category and put them in the “Use Sparingly” category at the very top of the pyramid.

The new study, which came from Willett’s group at the Harvard School of Public Health, corroborates the notion that we should view potatoes as a starch—and a fattening one at that—not as a vegetable.