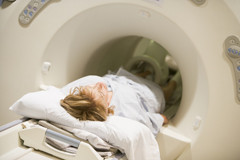 Proposed recommendations from the influential U.S. Preventive Services Task Force call for annual CT scans for some current and former smokers. Implementing these recommendations could prevent an estimated 20,000 deaths per year from lung cancer.

The task force suggests annual testing for men and women between the ages of 55 and 79 years who smoked a pack of cigarettes a day for 30 years or the equivalent, such as two packs a day for 15 years or three packs a day for 10 years. This includes current smokers and those who quit within the previous 15 years. According to the draft recommendations, which were published today in the Annals of Internal Medicine, the benefits of annual checks in this group outweighs the risks.

Checking seemingly healthy people for hidden disease is called screening. The idea here is that selectively using CT scans could cases of early lung cancer. When detected in its earliest stages, lung cancer is often curable by surgically removing the tumor. The new recommendations would apply to about 9 million Americans.

Keep in mind that these are only draft recommendations. They have been posted for public comment until August 26, 2013.

The downsides of screening

Finding lung cancer early is clearly a benefit of annual CT screening. But there are downsides of such a strategy. The scans will undoubtedly find many “spots” on the lungs that are not cancerous and would never cause any harm. Based on studies done so far, more than 20% of the scans will show areas of concern that will require additional testing to determine if lung cancer is really present.

That may mean additional radiation from repeat CT scans. Sometimes it will require more invasive testing, such as a lung biopsy or bronchoscopy to determine if the spot was a cancer. Bronchoscopy is a procedure in which a tube is threaded down into the airway. Even though biopsy and bronchoscopy are safe procedures, they can cause injury.

Ultimately, only 5% of suspicious spots will turn out to be lung cancer.

The Task Force recognizes that there are some important unanswered questions. These include:

What Changes Can I Make Now?

CT scans can’t prevent lung cancer. Nor can they detect precancerous changes At best, they can detect lung tumors early enough that the odds of a cure by surgery are good—but not guaranteed.

The best way to prevent lung cancer is to never smoke or to quit. One of the lessons we’ve learned is that it is never too late to quit. If you quit at age 60, you stand to tack on about three years to your life expectancy. Quit at 50, and you earn six extra years. Quit at 30, and a whole decade is deposited into your life expectancy account.

There’s no better health deal around.

Screening, if cost-effective is one of the best ways to reduce our healthcare (and ultimately, health insurance) costs.

Under the new healthcare legislation, many more unhealthy persons will be insured, and thus, needing expensive medical treatment.

Unless a large number of young persons purchase coverage, the system will need help. Maybe increased screening is the shot in the arm that is needed.

I think annual testing is a great idea. I run an electronic cigarettes website and am interested to know if you are part of the ‘less harm’ or ‘no harm’ camp when it comes to ecigs vs no ecigs.

Nice post, you don’t have to read Grays’ anatomy to get plenty of info Thaks

Concerning the proposed recommendations on lung cancer, it would be very helpful and relieving for a lot of folks, if having annual testings would actually prevent that many deaths as estimated. I think it is worth the try because if one thousand lives can be saved, it’s well worth it in my eyes.
I do find the sections on the downsides of screening and the changes people can make now quite interesting. Overall, I think this post was well crafted with valuable information that can be of great help for many.