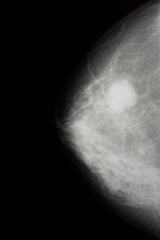 Last week, the media were using terms like “smart bomb” and “miracle drug” to describe an experimental therapy for a particularly aggressive form of breast cancer. The treatment at the center of this attention is a drug combination called trastuzumab emtansine (T-DM1). Could it really be a breakthrough for cancer researchers and women with breast cancer?

“There is great excitement about T-DM1,” said Dr. Beverly Moy, assistant professor of medicine at Harvard Medical School and clinical director of the breast oncology program at Massachusetts General Hospital’s Gillette Center for Women’s Cancers. “Thus far, it improves progression-free survival and has fewer side effects than some of our other standard therapies.”

At the same time, Dr. Moy cautioned that we need to be careful about overstating these preliminary study results. “At this time, we need to interpret the overall survival results with caution, since the difference is not yet statistically significant.” To achieve that, the evidence must confirm that the treatment really improves survival, and that the results didn’t happen by chance.

T-DM1 is a combination of two drugs—the antibody trastuzumab (Herceptin) linked to the very powerful cancer-killing drug emtansine (DM1). The combination is designed to treat HER-2-positive breast cancers. In these, cancer cells have more receptors for a protein called HER-2. One out of every five breast cancers is HER-2 positive; these are a particularly aggressive type of breast cancer.

The reason for the media’s “smart bomb” analogy is the way in which T-DM1 targets breast cancer cells. Herceptin guides DM-1 to the HER-2 receptor, so it can be released directly into the cancer cells. This focused attack bypasses healthy cells, which the chemotherapy drug would otherwise damage.

The study, called EMILIA, included nearly 1,000 women with HER-2-positive breast cancer that had spread either within the breast or elsewhere in the body. The women were randomly assigned to receive either T-DM1 or standard breast cancer treatment with the chemotherapy drugs capecitabine (Xeloda) and lapatinib (Tykerb).

After two years, 65.4% of the women taking T-DM1 were still alive, compared to 47.5% of those on the standard treatment. “The drug worked. It was significantly better than a very effective approved therapy for HER2 overexpressing metastatic breast cancer,” lead study author Dr. Kimberly Blackwell, professor of medicine and assistant professor of radiation oncology at the Duke Cancer Institute, said in a news release.

What was perhaps most dramatic about this new drug combo was the relative lack of side effects compared to chemotherapy drugs. There was no hair loss; no debilitating nausea. “For patients facing metastatic breast cancer, this is a breakthrough,” Dr. Blackwell said.

Some of the women who took T-DM1 did have a lower red blood cell count and elevated liver function tests, but these side effects stopped when women took a break from the drugs. Another sign the combination was more tolerable is that there was only one toxicity-related death in the T-DM1 group compared to five in the standard chemotherapy group.

Too early to tell

It is too soon to tout T-DM1 as a wonder drug. The study was presented at the American Society of Clinical Oncology (ASCO) meeting earlier this month, but it hasn’t yet been published. “It is important to see the final published, peer-reviewed manuscript in order to examine details of this trial,” said Dr. Moy.

T-DM1 is still an experimental drug, and has not been approved for use by the FDA. Women with advanced HER-2-positive breast cancers still have several other treatment options—including the new biologic drug pertuzumab (Perjeta), which the FDA green-lighted this past weekend. There is also the standard regimen of Herceptin and lapatinib (Tykerb) plus chemotherapy. According to Dr. Moy, these treatments are very active, effective, and safe. “Based on the results of this T-DM1 trial, we look forward to having another great treatment option for these patients,” she said.