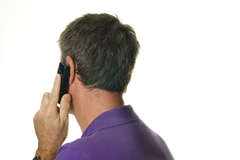 If yesterday’s announcement by the International Agency for Research on Cancer (IARC) that cell phones may cause brain cancer has you worried, you might want to wait a bit before trashing your mobile phone and going back to a land line.

Last week, the IARC convened experts from around the world to assess what, if any, cancer threat cell phones pose to the 5 billion or so people who use them. After reviewing hundreds of studies, the IARC panel concluded that cell phone use may be connected to two types of brain cancer, glioma and acoustic neuroma.

That sounds mighty scary. But the IARC said the evidence for this conclusion was “limited.” Most studies have shown no connection between cell phone use and brain cancer. In the relatively small number of studies that have observed a connection between the two, the positive result could be due to chance, bias, or confounding.

The decision puts cell phones in IARC’s Group 2B category of agents that definitely or might cause cancer. Group 1 are things like asbestos, cigarette smoke, and ultraviolet radiation. Things in Group 2B are “possibly carcinogenic to humans.” Other denizens of this group include coffee, pickled vegetables, bracken ferns, and talcum powder.

I think the IARC decision puts cell phones on notice—a formal “we’ve got our eyes on you” warning—more than it fingers phones as a cause of brain cancer. For one thing, the evidence so far is pretty weak. Writing on the Cancer Research UK Web site, blogger Ed Yong offers a peak at the data through 2009, taken from a review by Swedish researchers. A graph from the paper shows that only one of 28 studies shows a statistically significant association between cell phone use and cancer. We’ll know more about the strength or weakness of the evidence when the panel publishes its report online later this week and in the July 1 issue of The Lancet Oncology.

For now, I’m far more concerned about being rammed by someone talking on his or her cell phone while driving than I am about getting brain cancer from a phone. If you think the IARC report warrants action, the FDA offers suggestions for reducing your exposure to radiofrequency energy from a cell phone, like using the phone less, texting instead of talking, and using speaker mode or a headset to place more distance between your head and the cell phone.