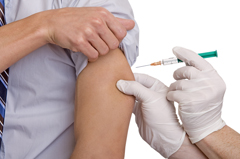 It’s shaping up to be a banner year for the flu. The City of Boston just declared a public health emergency, with 700 cases of the flu reported so far this season, compared to just 70 cases last year. Four Boston residents, all elderly, have died.

A similar spike in flu is happening all around the country. In Pennsylvania, Lehigh Valley Hospital has set up heated tents outside the emergency room to handle the mounting number of flu victims. In Missouri, an unusual strain of the flu virus has sickened hundreds of children.

According to the federal Centers for Disease Control and Prevention, this year’s flu season is shaping up to be a bad one. By the end of December, the flu was widespread in 41 states. The CDC says that more than 2,000 people have been hospitalized so far; scores of adults have died, as well as 18 children.

One way to keep from coming down with the flu is to get the flu vaccine. (Almost everyone age 6 months and older should be vaccinated. Click here to see if you are on the list.) If you haven’t already done this, it isn’t too late. Ask your doctor, or use the CDC’s clinic finder to locate a clinic near you that administers the vaccine. Many pharmacy chains offer the flu shot, and some accept insurance for it. Washing your hands often, and staying away from people with the flu when possible, are also good strategies.

You can also contribute to efforts to track the flu. Via the website/app called Flu Near You, you can add a pin for every case of flu you know about. (Flu Near You was developed by John Brownstein, an associate professor of pediatrics at Harvard Medical School and is administered by the HealthMap program at Boston Children’s Hospital.)

Related Information: Viruses and Infectious Diseases: Protecting yourself from…