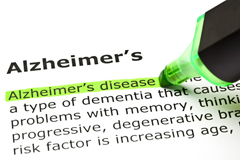 Barbara Moscowitz, coordinator of geriatric social work for the Geriatric Medicine Unit at Harvard-affiliated Massachusetts General Hospital, spoke to me and about a dozen other Harvard Medical School employees yesterday as part of series of seminars on family life and other issues offered by the school’s human resources department.

Moscowitz’s talk was titled “Dementia and Cognitive Decline (Aging Gracefully).” I was there mainly out of professional interest because I’ve written a couple of articles for the Harvard Health Letter recently about Alzheimer’s and dementia, including a piece in the September 2011 issue about mild cognitive impairment and another in July 2011 about new Alzheimer’s guidelines.

But I also wonder about how my own aging brain is faring (not well, it seems, on some days) and I have an older parent (age 81).

A disease of behaviors

Moscowitz covered some of the basics about dementia and Alzheimer’s disease. I always appreciate those reminders that not all forgetfulness and mental fumbles should be chalked up as a sign of impending Alzheimer’s. I seem to be safely in “normal, age-related cognitive changes” territory—at least so far!

But it seemed to me that Moscowitz had some special insights into caring for people in the later stages of Alzheimer’s disease, drawing on not only her 30 years of professional experience but also the personal experience of helping take care of her mother, who suffered from dementia the last several years of her life.

All of her professional experience didn’t keep her from crying sometimes, she told us.

Moscowitz described Alzheimer’s as a “disease of behaviors” that can wear down family and loved ones. People with Alzheimer’s can become selfish, ungrateful, manipulative, and paranoid. Even the forgetfulness can be trying if it means having to repeat things over and over again. It can be hard for family and loved ones to see those changes as “the illness talking” and manifestations of a diseased brain, noted Moscowitz. We ordinarily view people as having some control over social feelings and behaviors like gratitude and appreciation for other people’s sacrifices.

Not a good time to introduce technology

In these gadget-crazed times we live in, it’s tempting to think everyone’s life will be improved with a new smart phone or tablet computer. But Moscowitz cautioned against introducing new technology into the lives of people with Alzheimer’s, even if they were fairly savvy before. The disease compromises the brain’s ability to process and retain new information of any kind. It also tends to impair some of the abstract thinking needed to master even the basics of some of these new diseases.

Instead of doing people a favor, you can make them feel frustrated and pretty stupid, she said.

In fact, Moscowitz said that sometimes the best thing a relative or loved one can do for a person in the later stages of Alzheimer’s is to take away responsibilities and tasks.

This goes against the grain. It may threaten a person’s independence. We also tend to think that it’s better for people, no matter what their condition, to stay engaged and manage for themselves as much as possible.

But Moscowitz said that in the later stages of the disease, the positives of independence for the person are often overwhelmed by frustration at not being able to handle responsibilities and tasks that used to be routine and perhaps an area of special competence.

Still, taking over the pieces of person’s life—pieces that are some of the essential ingredients of being adult—isn’t easy. The person with Alzheimer’s may get angry and resentful. And for caregivers, it may mean taking on yet another responsibility. Moscowitz had some helpful suggestions for how to avoid confrontation.

Work with the person. If someone is having difficulty paying bills, rather than taking away the checkbook right away, arrange a set time (say, the third Wednesday of every month) to work on paying the bills together.

Arranging for online banking and automatic payment of some bills can also reduce the number of checks that a person has to write.

Introduce change as being on a trial basis. If your help seems permanent, it may seem demeaning or threatening. But if you say you are going to help for just a little while, the person may be more accepting. Leave it open ended and never say forever, Moscowitz advised.

Enlist the help of a doctor. A little bit of medical authority can go a long way. Some doctors will even write out a change as a mock prescription (“Mrs. Smith will pay her bills with her son John the third Wednesday of every month.”)

Get an objective assessment of driving ability. Deciding when someone is no longer a safe driver is one of the most difficult and common issues for people taking care of Alzheimer’s patients. Hospitals and other organizations have set up programs to evaluate people’s driving abilities. Taking the car keys away becomes a matter of outside objective evaluation, rather than subjective judgment of family or loved ones. The Drivewise program at Harvard-affiliated Beth Israel Deaconess Medical Center is one such program. Counseling and advice about transportation services are often offered if the tests show that the person shouldn’t be behind the wheel.