It’s Halloween—a time when we’re preoccupied with witches, ghouls, and other frightful creatures. But this year, no creature is generating as much buzz as the zombie. Zombies have inspired movies and TV shows, video games—even a bloody Pride and Prejudice takeoff. Could all this talk of the undead be foreshadowing a real-life zombie apocalypse? In fiction, yes. But not in real life. A Harvard ethnobotanist once found that a neurotoxin was the cause of several cases of zombie-like living deaths in Haiti. Oddly shaped proteins called prions have also been linked to brain diseases that vaguely resemble zombieism. In his novel The Zombie Autopsies, Dr. Steven Schlozman, a zombie enthusiast and professor of psychiatry at Harvard Medical School, imagined an infection scenario that turns normal human beings into flesh-craving monsters. Although a pandemic that creates zombie-like symptoms is theoretically possible, a real-life zombie apocalypse shouldn’t be high up on our list of worries.

The term “stroke” conjures up a frightening bolt out of the blue. It certainly feels that way when it happens. But the sudden onset hides most strokes’ decades-long development stemming from slow but steady damage to blood vessels, the growth of artery-clogging plaque, or the erratic heart rhythm known as atrial fibrillation. This long gestation means it is often possible to avoid a stroke by fighting arterial corrosion. Today is World Stroke Day—a moment to pay close attention to stroke. Worldwide, this brain-damaging condition afflicts millions of people each year, and kills more than 6 million. In the United States, about 800,000 people have strokes each year, and about 140,000 die from them. There are two main messages of World Stroke Day: Stroke can be prevented. Stroke can be treated if detection and treatment happen quickly.

Better attention to four common health factors could go a long way to preventing a stealth condition known as peripheral artery disease (PAD). That’s the upshot of a Harvard-based study published today in JAMA. PAD usually refers to blockages in the arteries that supply blood to the legs and other body parts below the heart. Such blockages can cause widespread damage, limit activity, and sometimes lead to death. In the new study, the factors that most strongly influenced the development of PAD were the same “big four” that are largely responsible for heart disease and stroke: smoking, diabetes, high blood pressure, and high cholesterol. Prevention is the best medicine. Quitting smoking and keeping blood pressure, cholesterol, and blood sugar under control can prevent PAD from getting established, or slow the disease process and possibly improve symptoms. Also important are exercise, a healthy diet, and taking medications as needed to protect the heart and arteries.

Many medical studies confirm what we know or suspect. Every once in a while, though, one surprises us, turning “conventional wisdom” on its head. That just happened with the sudden shutdown of a long-running diabetes trial called Look AHEAD (Action for Health in Diabetes). Begun in 2001 and scheduled to last another two years, Look AHEAD was designed to see if an intensive diet and weight loss program could reduce the number of heart attacks, strokes, and other cardiovascular problems in people with type 2 diabetes. An early peek at the data showed that the program had little apparent effect, and the investigators concluded it would be futile to continue. This does not mean that we should ignore diet and exercise in treating of type 2 diabetes. Instead, the details of the study results, which haven’t yet been published, are likely to reveal other explanations.

Two years ago, new research showed that American girls were hitting puberty at younger ages than ever. The same thing is happening with boys: they are starting puberty almost two years earlier than they did 30 to 40 years ago. Why this is happening isn’t clear, but it could affect social and sexual behaviors. A new study shows that the average age of puberty is now 10 years for white boys (about one-and-a-half years earlier than what has long been considered “normal”), 9 years for African-American boys (about two years earlier than expected), and 10 years for Hispanic boys, which is unchanged from before. Although early puberty is increasingly common, it can be a signal of a tumor in the brain, pituitary glands, or elsewhere; an underactive thyroid gland; or other medical problems.

Depression can strike at any age. Children can develop it, as can octogenarians. No matter when it starts, depression can drain the joy and pleasure from life. The first appearance of depression later in life may also be a signal of memory loss or dementia down the road. According to a study in the Archives of General Psychiatry, dementia is more common among people who become depressed in middle age or later in life than among those who aren’t depressed. Depression is often overlooked in older adults, so it’s important to be on the lookout for warning signs, like feelings of hopelessness, loss of interest in activities, trouble sleeping, and more. It’s important to treat depression in individuals with the beginning of dementia, and older individuals who are depressed should be evaluated for dementia. 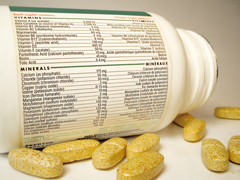 Americans’ love affair with vitamins—more than half of us take one a day—isn’t well supported by science. Trials of single vitamins, like E, C, and beta carotene, have been a bust. Whether multivitamins offer any health benefits has been something of a mystery. Now a new report indicates that taking a standard multivitamin-multimineral pill every day for more than a decade reduces the odds of developing cancer by 8%. The finding comes from the Physicians’ Health Study II, a Harvard-based trial in which nearly 15,000 male physicians took a daily pill containing 31 vitamins and minerals (Centrum Silver) or a placebo. The reduction could be due to fixing micronutrient deficiencies. It’s also possible that low doses of several vitamins and minerals might work together in other ways to prevent cancer. A daily multivitamin-multimineral supplement can provide some nutritional insurance, but it’s no replacement for vegetables, fruits, whole grains, and other healthful foods.

For all too many people, using a tablet computer is a pain in the neck, shoulders, and back. Why? Widely popular tablets like the iPad, Nook, Kindle Fire, and Xoom are so light and easy to handle that you can hold one on your lap or in your hand. That can put you in a position that’s bad for your neck, shoulders, and back. In a study of 15 experienced tablet users, Harvard School of Public Health researchers found that working with a tablet held on the lap or placed flat on a table makes the neck bend much more than does working with a desktop or notebook computer. Neck-wise, the best tablet orientation was having it propped up on a table. Next time you expect to be working with a tablet computer for more than a few minutes, place it on a table and use a case that holds it at a comfortable viewing angle. Shift your hands, your weight, or even stand up when you can. And take a break every 15 minutes.